Shadow Teams are elite Nod infiltration specialists who had considerable expertise in guerrilla warfare. Their machine pistols allow for quick assassinations while their bombs can inflict serious damage to structures. For added battlefield mobility, they can take flight using gliders. However, like many Nod units, they are not suited for straight fights. They appear in Tiberium Wars and Kane's Wrath.

They are trained much like the ninjas of ages past, providing them with great skill at stealth and infiltration. Much like their famed forebears, Shadows are capable of seemingly appearing from nowhere and moving at lightning speed - usually in groups of four - thanks to their training. Shadows wear body-fitting jumpsuits with lightweight body armor and a full-head plexiglass helmet with rebreathers. The armor is equipped with collapsible powered hang-gliders, giving them the ability to fly. In combat, they wield dual fully automatic pistols that make short work of infantry. They also carry a special explosive that can destroy vital structures; the chemical composition of this weapon was acquired by Nod spies from GDI laboratories.

GDI, soon after the deployment of Shadow Teams, began introducing borderline paranoid security measures, especially learning of the Shadow strike teams. After noting the effectiveness of GDI Juggernauts being spotted for by sniper teams, Nod has equipped its Shadow teams with special artillery beacons, allowing for a devastating barrage from Nod Specter artillery units. These beacons may also be deployed in-flight.

Although powerful, the Shadow Teams have several drawbacks. First, while gliding, they are incapable of defending themselves, and units with both stealth detection and anti-air capability can make quick work of them. Second, while capable of shredding infantry, the sub-machine guns they carry are ineffective against most types of vehicles. The guns also lacked range, and if their targets were not eliminated, it placed the Shadows at risk due to their lack of armor. Sniper teams and Buzzers are also very effective at decimating them.

The existence of Nod stealth infantry had been present in the previous two Tiberium Wars. During the First Tiberium War, the Brotherhood made use of Black Hand elite soldiers wearing Stealth suits making them a dangerous foe against the Global Defense Initiative. In the Second Tiberium War, Nod used Chameleon Spies as operatives in special missions. Capitalizing on this earlier effectiveness, the Brotherhood created Shadow Teams at some point after the Firestorm Crisis.

Kane deployed several teams of Shadows on a mission commanded by his loyal AI LEGION in order to retrieve advanced GDI technology as well as the plans to the enemy's Ion Cannon's. These Shadows were supported by a Nod Commando in order to complete the mission. During the Third Tiberium War, shadow teams made significant contributions during the Attack on Goddard Space Center, retrieving the missing components in Slovenia and sabotaging GDI and Scrin defenses in Operation Stiletto.

The Shadow Teams are comparable to the GDI Sniper Teams in many ways, including their strong damage versus infantry, their stealth training, and ability to act as spotters for their respective artillery pieces. Like snipers, they require their faction's infantry tech building (i.e. the Secret Shrine). Shadow Teams are excellent for hit and run tactics, as they can slip into enemy bases and take down key structures such as power plants and war factories. They are not nearly as resilient as the Zone Raider or other heavy infantry, and should be used inventively and with care.

Due to their ability to take down most infantry very quickly and plant explosive on structures, they are also somewhat similar to the Commando. They have the benefit of being cheaper to train, allowing multiple units to be trained, being permanently stealthed, and being able to fly over obstacles. Another ability of shadow teams is that they are able to attack buildings with their guns (although they deal very little damage). This is helpful in certain campaign missions if the player wishes to take a stealthy approach to attacking an enemy base. In many cases, AI-controlled units defending their base will only attack if your units enter their attack range. A Commando must walk up right next to a building in order to attack it, possibly entering the enemy's attack range and triggering a response.

However, Shadow Teams have several drawbacks. Their armor is very weak compared to the Commando and if they are spotted, they can be quickly killed by most anti-infantry weapons. They have a short attack range, allowing many enemies to outrange them. Despite carrying explosives, they are nowhere near as efficient in demolition as a Commando is. While they are able to take out weaker structures in one blast, stronger structures require several squads or several goes to destroy, which may only alert the enemy that they have been infiltrated. More often then, the mere sighting of a shadow team will set off alarms and cause the enemy to build up their defenses to a paranoid level (anti-air units covering the back of the base where there maybe a impassible ridge or body of water, anti infantry defenses watching every square meter of ground inside the base) and can potentially change the tactics of the opposition from an offense strategy to dedicating to defense.

A common all-in strategy in multiplayer is the Shadow team rush. This involves building a power plant, a Hand of Nod and a Secret Shrine. Then, two veteran Shadow teams are called from the Shadow strike team support power, the third one is purchased at the Hand of Nod and the fourth one is received from selling the Secret Shrine. All teams enter glider mode and move to the enemy's base, targeting power plants, refineries and barracks. 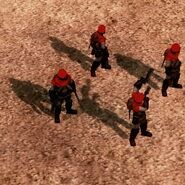 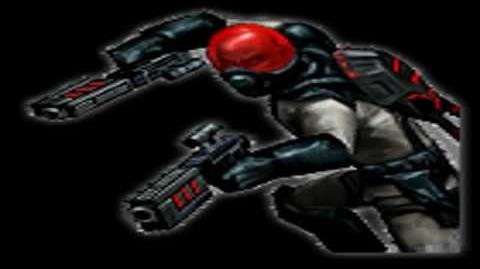 Retrieved from "https://cnc.fandom.com/wiki/Shadow_Team?oldid=230987"
Community content is available under CC-BY-SA unless otherwise noted.