General 'Anvil' Shin Fai was a Chinese Class AAA general serving in the People's Liberation Army (PLA) during the War against the GLA.

On the battlefield, China's greatest resource is the millions of individuals in uniform, and General Shin has staked a career on them. Known to his troopers as The Anvil, the 57 year old[1] General Shin can mobilize four divisions in twenty-four hours thanks to a streamlined, and sometimes brutal, command structure. Discipline is very strong with General Shin, and officers and infantry who can maintain it are rewarded.[2]

The General has developed advanced field training programs for the Red Guard and elite operatives. Military analysts credit the speed and professionalism of General Shin's peacekeeping units with preventing the Taiwan Conflict of 2009 from becoming a global war. His divisions feature several weapons and transport systems unique in the People's Liberation Army.[2]

as a child, shin fai participated weapon schools, he always having weapon exercise whether he has a breaktime available given, he would even craft and play toy guns at a moment while in his house where his parents would get annoyed because of his irritable behavior of his personality, when shin fai grew up and finished his studies, he enlisted up in the PLA division and pass the sharpshooting training he became a successful enrollee soldier during his rookie time he experience harsh military training and orders being given to him until he became a general.

as being the most strictest general in the PLA, Shin Fai himself conduct full lay orders of heavy observance by method of strict discipline for his men, he also posses high pointed skills for gun making in which give him a talent of weapon professionality, the general utilize the greatest research of advanced infantry arsenals, creating a series of fully automatic rifles for his men and more larger capacity index of available seats to all his transporting units for infantry modifying them with attacking hole windows where his men can fire and defend from their vehicle and bunker defensive positions, however he largely spent all of his pointing skills by making through the strengthening of his infantry, this gives him a less innovation of heavy war machines, because of this, he cannot produce heavier vehicles to protect his men from being vulnerable which leaves him capably helpless of being runned over.

Despite the fact that his taunts are in the games files, he is not faced in the Generals Challenge. This means that if the player chooses to play as Fai then they will have to beat all the Generals. The same goes with General Rodall Juhziz.

However, certain modifications, such as Pro:Gen, allow the player to battle against Fai in his own area. In these mods, his base can only be accessed via three bridges, each bridge being heavily defended by garrisoned bunkers and walls. Fai's base appears to be the most heavily defended of all the Chinese generals though that does not stop him from sending waves of infantry to attack the player's base.

All of Fai's infantry would have been upgradeable with his own version of protective chemical suits, similar to the standard American Chemical Suits upgrade. The sounds for this upgrade are still accessible from in-game files and the upgrade itself can be applied if modded in by the user.

Fai's pistol is a CZ-75 (Pre-B model) and the rifles in the background are H&K SL8s. 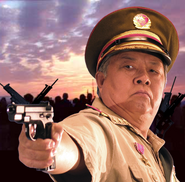 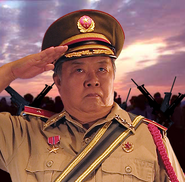 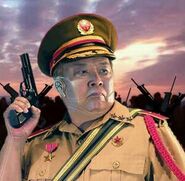 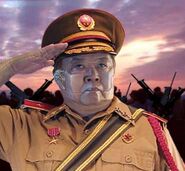 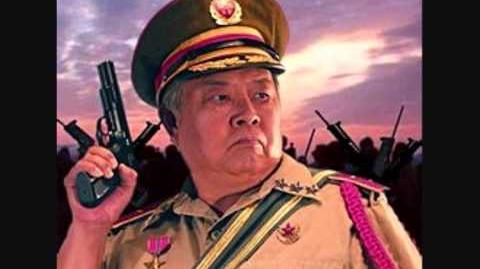 Retrieved from "https://cnc.fandom.com/wiki/Shin_Fai?oldid=245732"
Community content is available under CC-BY-SA unless otherwise noted.