The black-cowled Shinobi are ninja-like units of the Empire of the Rising Sun. Shinobi can not only infiltrate structures to cause all sorts of mayhem, but can also swim and are able to run as fast as cheetahs. These shadow warriors are armed with traditional Japanese swords and razor-sharp shurikens that can take down any organic units and small robotic units such as terror drones.

The Empire of the Rising Sun evidently knew much of its enemies' weaknesses prior to unleashing its hidden army upon the world. Furthermore, it appeared that the Empire had already developed more advanced versions of certain forces commonly used by the Allied and the Soviet, such as their mobile construction vehicles. Exactly how the Empire managed to reverse-engineer top-secret military technology and discover the few vulnerabilities of the two largest world superpowers is anyone's guess. However, anyone who guessed that the ranks of the Imperial Shinobi had something to do with it is probably on the right track. The Empire of the Rising Sun's unorthodox intelligence network seems to consist of these cloaked assassin-saboteurs, who have no official connection to Japan's international or military affairs, yet seem to be showing up more often in battlefield situations. Disturbingly, while these shadowy characters are equipped with what might be considered ancient, old-fashioned weapons by modern standards, they have proven to be uncommonly lethal.

Counter-intelligence had discovered only a few facts about the shinobi, though their performance in combat was beginning to speak for itself. Shinobi were presumed to have been rigorously trained from childhood to serve the Emperor's closest military advisors, to whom they are bound as vassals. Shinobi can silently slay opposing infantry with either their blades or throwing shurikens, and can infiltrate even the most heavily-guarded compounds and disappear as if into thin air should any foes catch wind of their presence. Thus, they are the secret spies and killers of the Japanese Empire's military. Despite the notoriety of their profession, however, the shinobi were rumoured to be well-trusted by and extremely loyal to their masters. These misunderstood warriors are in fact so dedicated, that they are absolutely willing and prepared to lay down their lives in combat, should their sacrifice improve the chances of a mission's success.

Shinobi are lightly armored and depend on their mobility in battle. They are equipped only to take on other infantry, though fast enough to evade explosive shells and other large weapons. They are uncannily capable of killing with but a single thrown blade or sword stroke. Initially, their bladed weapons were assumed to be ceremonial in nature, like the red sashes on their wrists (which appear to be a status symbol of some sort). Then, when an entire platoon of the Soviet Union's elite Tesla troopers was found dead, with shurikens bearing the Japanese Emperor's crest lodged inside the victims' vitals (after having passed cleanly through the seams of their armoured suits), the sheer skill and dangerous potential of the Imperial shinobi became quite clear. To make matters worse, the few occasions on record when these warriors have been surrounded by opposing forces, they used some sort of smoke bomb device to trick the opposition into holding fire long enough to make their escape.

There seems to be no terrain the Imperial shinobi cannot cross, and no fortress they cannot break into. Reports of shinobi infiltrations are growing by the week, causing, some would say, a bit of a panic among Soviet and Allied forces unaccustomed to having to defend their forward bases against such an assault. The consequences of a shinobi infiltration are varied and widespread, ranging from an entire base power grid and battlefield radar going offline, to outright theft of military production resources. Unfortunately, no one besides Japan's top military aides seems to know just how many shinobi are in active duty today.

During the Third World War, the Shinobi, especially in the Imperial perspective, were proven to be powerful infantry killers especially in Operations The Death of Father Frost and Barbarians at the Bay thanks to their ninjutsu training, able to pop up in front of enemy Infantry and cut them down to size with their sword.

In the Soviet and Allied perspectives of the war, the Shinobi proved to be a real troublemaker and menace against the Allies and even the Soviets, seeing enemy infantry as weeds to be cut with their ninja-to and shuriken.

During Yuriko's perspective of the Uprising, a number of Shinobi was among the interior guards of the Shiro Sanitarium during her jailbreak and the post-WW3 return visit. Obviously, their lightning-fast speed, razor-sharp ninja-to and even sharper shuriken made them perfect "Psi-goons" for Izumi, Yuriko's sister.

Battlefield reconnaissance has revealed at least these facts about the Shinobi:

• One-kill cut -- As a result of a lifetime of training and a generation of blade-crafting, the shinobi's swords and shurikens have proven to be more lethal than just about any modern anti-infantry weapon.

• Smoke bomb in case of emergency -- If a shinobi is fired upon, he may throw one of his evasive smoke bombs to cover his tracks and escape. Vigilant forces may re-acquire the shinobi as a target, though usually, the shinobi gets away. This trick is rarely used, possibly due to the strictness of the shinobi code.

• Breaking and Entering -- Shinobi may infiltrate just about any type of military structure on the battlefield, causing all sorts of headaches to the opposing force. Shinobi never seem to emerge from out of infiltrated structures, remaining inside to ensure a proper sabotage.

• Fleet-footed, Web-footed -- Rumours of shinobi being so swift and so light on their feet as to be able to run across the surface of the water are as yet unconfirmed. However, there is no doubt at this point that shinobi are no less capable of travelling the waterways of the battlefield as the surface. 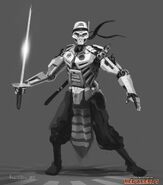 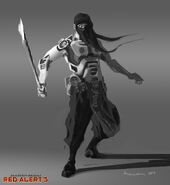 Scrapped concept
Add an image to this gallery

Retrieved from "https://cnc.fandom.com/wiki/Shinobi?oldid=237579"
Community content is available under CC-BY-SA unless otherwise noted.