Shinzo is a member of the Empire Shogunate and architect of the Imperial invasion into the Soviet Union during the Third World War. An enigmatic, experienced commander, he is often referred to as the "Emperor's Shadow". Presumably, this indicates a very high status within the Imperial Armed Forces.

He is a strict follower of the traditional samurai code of bushido, the "way of the warrior", and is fanatically loyal to the Empire and the Emperor's divine vision. He is ambitious and calculating, and it is said that his withering stare is enough to kill an enemy. However, he treats his allies and subordinates well.

As the Emperor's shadow, Shinzo makes prominent use of aircraft, but is also noted for deploying Shinobi.

In the Allied Campaign, the Emperor's Shadow Hand is one of the Commanding Military leader to invade the Allies and the Soviets. Although he is a feared enemy, upon defeating his enemies their morale seems to motivate them to be stronger next time. He puts up a good fight against Lissette and the Allied Commander, but his honorable actions were but futile maneuvers, failing to protect Tokyo in Forever Sets the Sun. At first, his waves accompanied by the Japanese devastating arsenal proves to be successful but a counter-attack by the Allied Commander and Lissette prove to be even more effective. After the Rising Sun was defeated at Tokyo, Tatsu surrendered and Shinzo did not approve of this bold diplomatic strategy. The Japanese Warlord only conceded for a short time to fight the Soviets on the behalf of the Allied High Command since the Communists were their enemies as well. The apparent "death" of the Emperor did have a negative effect on the Japanese Commander and he swore that the Barbarians would one day pay for their insolence.

Acting as the Shadow Hand of the Emperor, Shinzo is known to be a Great Master of War and a fearless strategist with traditional methods if not extremely brutal. He is a conservative warrior worshipping Emperor Yoshiro and defends the Empire with an unending loyalty. Commander Shinzo assists the Imperial Commander-Shogun in the following battles in the War in the Imperial perspective, showing his foes what honor truly means in his Empire.

In the beginning of the Invasion, they attack a Soviet town before New Year's Eve to break the morale of the Communists. Shinzo seems to appreciate the Shogun treating him like his disciple. Shinzo and the Shogun orchestrate to destroy monuments resulting in the Soviet people to wake up in a moment of tremendous fear and despair. During their glorious yet surprise assault, they eliminate Commander Oleg and a large Soviet force. Breaking the morale of the Russians, the Shogun takes pride in destroying the barbarians.

Shogun Shinzo is recognized as the architect of the Imperial Invasion in the Soviet territory.

Following several of the Empire's victories against the Barbarians, Shinzo remains proud and confident of the Empire's glorified message to the world. When Yokohama is under siege in Barbarians at the Bay by Commander Lissette and General Krukov, the Shadow's Hand rallies his forces and together with the Shogun and Yuriko Omega they repulse the Invaders. At this point, it is implied that Shinzo holds in high respect young Yuriko for her prowess and psionic abilities.

During the final battle of the War, Shinzo participates in the assault of Amsterdam, supporting his "disciple" against the remnants of the Barbarians.

During the battle, Shinzo shatters the superweapon of the enemies on behalf of the Shogun's command. Together they destroy the heavy and airfield bases and defeat Warren and Giles. Eventually, Bingham himself falls overpowered. Later, they lay siege to their enemies with honor and crush the FutureTech Center in the process. With their King Oni Elites, they neutralize fatally several enemies such as Dr.Zelinsky.

Shinzo is rewarded for his courage and victories and look forward to train a new generation of shoguns.

In the Soviet campaign, Commander Shinzo battles the Soviet Union on many occasions. He ambushes the Soviet hero and Commander Moskvin at Krasna 45 but the two of them managed to survive. He departed safely leaving them to another obstacle. The two Russians seize their revenge eventually. He is killed in To Tame a Living God when the Red Army assaults the Emperor's palace in Japan.

The death of Emperor Yoshiro during the war took a heavy toll on Shinzo, who was considered one of the late Emperor's most trusted retainers. After Crown Prince Tatsu surrendered to the Allies, he retreated to a life of seclusion in his ancestral home in Shin Iga Province, supposedly to search for spiritual guidance. In reality, however, he was amassing followers and preparing to overthrow Tatsu. In response to this, the Allies' best field officer was recalled from vacation to quell Shinzo's insurrection.

The Allied Commander escorted an MCV into the area, and quickly established a base. With the aid of FutureTech's latest Harbinger gunships well as defectors from Shinzo's Nagama Dojos (who knew that the rebellion was hopeless, and aided the Commander in exchange for reduced sentences), the Commander successfully defeated Shinzo's forces and froze his ancestral residence with cryo weapons.

Seeing that he has lost, Shinzo attempted to flee the battlefield in a Sudden Transport. Several Tsunami tanks also emerged from the mansion, with the disguised Sudden Transport hiding among them. This proved futile, however, as the Commander managed to freeze his transport before he could escape. Ultimately, Shinzo was captured and transferred to Detention Camp Dakota, and his remaining forces surrendered to Tatsu.

His ultimate fate is unclear, though it is likely that he escaped from Allied imprisonment after Yuriko Omega destroyed Camp Dakota, thus explaining his appearance in Commander's Challenge.

Shinzo appears as one of the many opponents of the FutureTech Commander in Commander's Challenge, occasionally allied with Kenji Tenzai.

Shinzo and Kenji are interrupted during a "real" chess duel by the FutureTech Commander's entry. Shinzo condemns the commander that he has "no place here", but he would not attack the commander unless he was attacked first. He was subsequently defeated in a similar fashion as Kenji.

Two Sides To Everything

With Japan nearly taken by FutureTech, Shinzo tries to use the Sea Wing/Sky Wing in this area to the north. If anti-air comes near to the sky, Shinzo switches it to the sea and if anti-naval units come across to destroy them, he switches them to the sky. He was defeated by the FutureTech Commander.

Shinzo and Hill fight one of their several fights in the Pacific, but in this one the Futertech Commander is pitted against both in a naval battle. Despite Shinzo monitoring two bases, he is defeated along with Hill.

In Indonesia, Kenji and Shinzo have been doing another civil war or possibly ally together to get their Wave-force artilleries to their positions. The Futuretech Commander was asked by Shinzo and Kenji that their civil war had been repeated. They were in turn defeated by the FutureTech Commander.

Moskvin's waterproofing compound meant that Kenji Tenzai and Shinzo Nagama will help him after FutureTech arrives in the area. Terror Drones and Shinobis came all across the battlefield to reach the base and since that, the Futuretech Commander had to blast them all out of the field. Shinzo's defeat believed that a Shinobi officer had betrayed him. This quote was used at the bonus ending of the Commander's Challenge after Kenji says "What happened?". The challenge takes place in Cuba, where The Great Bear Trap was located.

At the Carribean Islands, all three Imperial shoguns had to defend their thoughts, with one Island and Castle as a prize. The FutureTech saw a three-headed battle here. Shinzo, Takara and Kenji were defeated afterward and their Naginata Cruisers were captured from them.

Come and Get It

North of Commander Giles Price's position in California lies the city of Seattle in Washington state. Shinzo attempts to control the city area using a Psionic Decimator. FutureTech has been allowed to save the civilians and end the Imperial stalemate in the United States of America. Shinzo has been defeated afterward with all of America being under Allied control.

In South Africa, Shinzo said that the Nanoswarm Hive is crucial to the final Japanese resistance on Earth. Giles Price and Vera Belova try to use their infantry to defeat the FutureTech Commander since their rivalry in both the Soviet Union and Mexico. They were defeated by the Commander in turn but both Shinzo and Vera decided to end their military careers on site.

Shinzo uses an overall balanced strategy, he will use everything in the Empire Arsenal to form an army. But Shinzo pays relatively less emphasis on naval forces compared to land and air battles, unless he is in a map where water battles are unavoidable. Shinzo is well-known for the active use of Tower Rush.

Shinzo will first send Burst Drones for scout purposes and usually let them attach to enemy ore collectors, later followed by Imperial Warriors and Tankbusters securing nearby domain. He will then try to set up offensive towers, as well as sending Mecha Tengus in jet form to harass Ore Refinery.

In mid-game, Shinzo will mass-produce Tsunami Tanks with support from Shinobis, Striker VXs and other units. He also actively expands his base and claim more Ore Mines for the economy as the game progresses.

In late-game, Shinzo's will send King Onis and Wave-Force Artilleries along with previous units, supported by Rocket Angels and Yuriko Omega.

Shinzo is portrayed by Bruce Locke. Known for his role as the Japanese robot Otomo in the movie RoboCop 3. 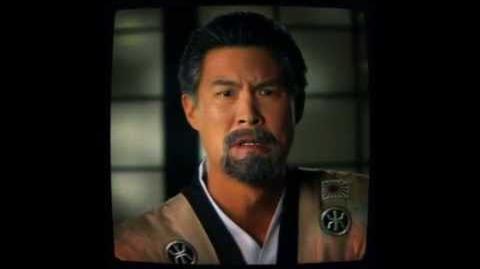 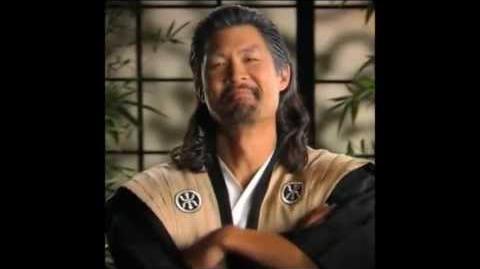 Retrieved from "https://cnc.fandom.com/wiki/Shinzo_Nagama?oldid=230941"
Community content is available under CC-BY-SA unless otherwise noted.