Shiro Sanitarium, or Shiro Psychic Research Center, was a facility located in Tokyo, Japan. Constructed by Shiro Psychic Research, this sprawling sanitarium housed the Empire of the Rising Sun's Omega Program, a psionic technology and munitions development project as radical and controversial as Dr. Shinji Shimada's psionic thesis. It was the place that "created" the psionic super soldier known as Yuriko Omega.

The facility has shown to be designed with a combination of modern, and traditional Japanese architectural elements. This resulted in a nightmarish fusion of an old Samurai-era fortress and a futuristic madhouse, as seen in the reconnaissance photos taken from the site. The corridors and rooms were equipped with scattered Psionic inhibitors and healing stations. The former installed by the time Yuriko returned to the Sanitarium to exact revenge. The interior spaces and elevators were large enough to accommodate vehicles and mechanized walkers, from Striker VXs to Giga Fortresses. It is also equipped with a small fleet of ore collectors, presumably to fund the researches conducted there.

Shiro Sanitarium also houses extensive cloning facilities, capable of creating and housing hundreds of Yuriko clones. These clones are almost as destructive and dangerous as the original, but do not possess some of her advanced psionic abilities, such as projecting a psionic shield or controlling the mind of enemy infantry.

Due to the strategic importance of this facility, Shiro Sanitarium is heavily defended by Imperial forces, including battalions of infantry, tanks, mechanized walkers, and Defender VX nanocores.

Before the outbreak of the War of the Three Powers, both Yuriko and her "sister", Izumi, were taken to Shiro Sanitarium for their psionic aptitude. While there, they were subjected to dehumanizing training regimes and traumatizing experimentations by Dr. Shimada. Eventually, Yuriko was psychically awakened by her Izumi, and attempted to escape the facility.

After fully restoring her psionic powers, which the scientists in the facility attempted to suppress, Yuriko managed to cut a swath of destruction through the facility, and almost escaped. Unfortunately for her, a squadron of Rocket Angels disabled her with their paralysis whips, and she was returned to her cell. Her escape caused billions of yen worth of damage, but the facility was eventually rebuilt, with Psionic Inhibitors added throughout the facility to prevent another such incident from occurring.

Yuriko was eventually captured by the Allies during the war. However, she broke free, and returned to the rebuilt Shiro Sanitarium to free Izumi and kill Dr. Shimada. Shimada attempted to slow her down by hiding in the lower level of the facility and blowing up the elevators. However, Yuriko managed to enter the last elevator and, after utterly destroying the Imperial forces protecting Shimada (including two Giga Fortresses), finally killed her sworn enemy. However, Izumi reveals that she has being using Yuriko to free herself, and plans on killing her in order to become the strongest psychic warrior. Enraged, Yuriko kills her sister in a final psionic battle, and the entire facility collapses from their combined powers. Yuriko escapes the crumbling Sanitarium, wondering what will she do next. 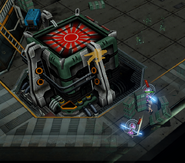 A Mecha Tengu emerging from a vehicle elevator 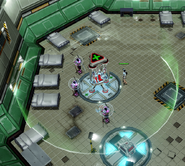 Exit to the Shiro Sanitarium 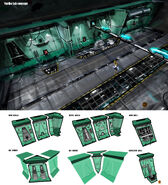 Interior concept art
Add an image to this gallery
Retrieved from "https://cnc.fandom.com/wiki/Shiro_Sanitarium?oldid=222943"
Community content is available under CC-BY-SA unless otherwise noted.