Rivaling the Allied Aircraft Carrier and the Soviet Dreadnought in terms of firepower, the Shogun Battleship is the crown jewel of the Imperial Japanese Navy in Command & Conquer: Red Alert 3.

The Shogun-class battleships are the flagships of the Empire and naturally heavily decorated with patriotic motifs. However, the beautiful, gently curved shapes of the ship are deceptive - the Shogun is a warship first and foremost, capable of devastating foes from great distances thanks to its massive Shirada cannons.

The design of these capital ships is a catamaran to compensate for the battery recoil and stability, also allowing it to fire on the move. Each battleship carries two turrets, each armed with three 400mm Shirada cannons, mounted back-to back. With this setup, the Shogun can fire on targets in every direction, compensating for the slow turning speed. A turret salvo is incredibly effective, even more so when the warship turns broadside and unleashes both guns at once. Each cannon fires an energized projectile, the explosion of which is measured in thousands of degrees Celsius at ground zero.

The Shogun Battleships can also defend themselves at close ranges, should any targets manage to close in. At that point, the captain of the battleship can supercharge the ship's engines and activate a point defense shield mounted at the front of the ship. The resulting charge is so devastating, any ship or amphibious structure that stands in the Shogun's way will be severely damaged or be outright destroyed by the ramming ship, with no damage to it.

Apart from an expansive bridge and cannons, the ship also has an on-board detention / meditation grove.

Service aboard the Shogun battleships is one of the highest honours for an Imperial citizen. Command of these ships is reserved only for the most decorated, honorable and often eldest members of the Imperial navy. Dying in the captain's chair while fighting for the Emperor is considered to be one of the highest honours achievable by modern Japanese citizens. In polls conducted with Imperial male youths aged 8–12, 26 percent stated that their lifelong ambition was to be the captain of a Shogun battleship.

The Shogun Battleships are extremely effective anti-surface and are best used for leveling even a heavily defended enemy base near the shore due to its long firing range. It is advised to position the ships sideways so that they can utilize both the turrets to fire all its 6 projectiles at once. They are also effective naval bombarding support for the Naginata Cruisers while dealing against other enemy naval units.

The Shogun Battleship has very few weaknesses: it is a heavily armored vessel and has the greatest firepower of the tier 3 ships, coupled with excellent range. It is often used in tandem with Naginata Cruisers and Sea-Wing. Should an enemy unit manage to break through the Naginata Cruisers, however, the Shogun is perfectly capable of defending itself at close quarters by simply ramming into the enemy, effectively capable of crushing any tier 3 ships like the Aircraft Carrier or the Dreadnought. or even Commandos like Natasha, Tanya however proves to be a pain to them up close.

In a standard one-on-one fight (without using special ability), A stock Shogun Battleship can defeat a Soviet Dreadnought, or an Allied Aircraft Carrier even while using only one of its turrets, using two turrets would double its firepower and lessen its time destroying any of the two opposing capital ships. However later patches to the game scattered the shots fired from its cannons effectively reducing the damage per recoil and reducing its effectiveness in one on one battle with other Capital ships unless they are face broadside (although it still can take down the Dreadnought even using a single turret) but this can be compensated when the ships are in large numbers or when the ship fires both the turrets from the side. Also, the scattered shots gives it more area of effect damage to enemy infantry or vehicles and are still effective against large structures.

However, the Shogun Battleship is not perfect and it is vulnerable to air attacks. Twinblade, Centuries and Vindicators and the new Harbinger Gunships an especially the biggest threat. Cryocopters are also useful in helping to take them out. Asides that, 'wolf packs' of well-handled Akulas can effectively sink them too, as can Terror Drones, who are too fast to be tracked by the cannons. Hence, anti-air and anti-ship escorts are often a must.

Battleships can be upgraded with extra sensors, armor, and other equipment with Imperial secret protocols. The protocol also change the appearance of the ship affected, battleship included. The crew also have been trained in other protocol that they will reduce resource for the propulsion and turned in to fire power, for a specific time.

Like other Imperial Units, The Shogun Battleships also benefit from the Robotic Assembly upgrade which reduces its Building times even lower making it the fastest Capital ship to build on the Red Alert 3 Universe.

In the Imperial Perspective, they were first seen being used by the new Imperial Commander with the Assistance of Commander Naomi Shirada to defend Pearl Harbor where their Shirada Cannons lay waste to the Allied forces under the Command of Warren attempting to seize the base housing Half of the Empire's Naval Fleet.

In the Operation Barbarians at the Bay the new Commander with the aid of Shinzo Nagama was granted the command of Yuriko Omega to re-establish control of the base defenses at Yokohama harbor where they manage to reactivate the Naval Docks which in turn grants them access to the Mighty Battleships where they used them to thwart the Bold attack commenced by the Allied-Soviet Coalition led by Lissette and General Krukov.

They were again used to assist the Shogun Executioner in laying waste to the Moscow after the failed attack on Yokohama Japan to level the city and to teach Krukov and Premier Cherdenko a lesson to not mess with them (Literally to destroy the Soviet Time Machine).

The Shogun battleships were instrumental in the destruction of the two Proton Colliders in the final Imperial Campaign as well as the initial failed attempt to destroy Futuretech Headquarters before Dr. Gregor Zelinsky used his unknown weapon in his last attempt to stop the Empire of the Rising Sun's Forces.

Battlefield reconnaissance has revealed at least these facts about the Shogun Battleship:

• Shirada cannons -- The Shogun battleships are armed with six guns a piece; three barrels on each of two mounts, one in the fore and one in the aft. While functionally similar to traditional 400 mm battleship cannons, the superheated slugs of the Shirada cannons are even more destructive yet more precise.

• Ramming speed -- Although the guns on a Shogun battleship are unable to track nearby targets, these vessels are far from defenseless up close. Their captains stand ready to supercharge their engines and crash straight through any enemy vessels that dare to close the distance.

• The highest standard -- There exist two types of Shogun battleships, one of which is rarer and reserved for the most-venerable captains and commanders. These fortified Shoguns can be identified by their ornamental flags, and are altogether more powerful than their counterparts.

• In support of the armada -- The strict code of the Imperial navy dictates a symbiotic relationship between various fleet elements, linking their survival to their cooperation. As a result, the Shogun battleship eschews any anti-aircraft weaponry, lending it a purity of purpose as well as a perceived weakness.

Yamato class battleships, real life pride of the Imperial Japanese Navy and functionally the closest thing reality has to the in-game Shogun Battleships. 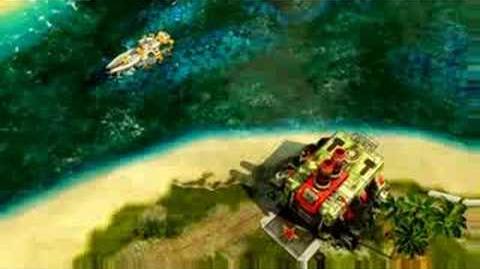 Retrieved from "https://cnc.fandom.com/wiki/Shogun_Battleship?oldid=231322"
Community content is available under CC-BY-SA unless otherwise noted.