The Sigma Harmonizer was a scientific project developed by the FutureTech Corporation sometime after the Third World War. It was located on Sigma Island, a heavily defended FutureTech facility.[1]

The Sigma Harmonizer project was controversial from the start, and hundreds of activists once protested the project outside FutureTech's corporate headquarters. FutureTech spokesperson Kelly Weaver assured the world at large that such scepticism was unfounded, saying that the Chronosphere was also controversial when it was first developed.[2]

However, its true purpose was a sinister one: Rupert Thornley, president of the European Union, planned to use the Sigma Harmonizer to not only cripple the Soviet Union, but also take over the world, creating "heaven on earth".[1]

Despite the controversies surrounding the project, as well as public concerns regarding its true purpose. The Sigma Harmonizer was eventually completed and close to activation. However, the Soviet Underground launched an attack on Sigma Island, and destroyed this deadly weapon before it can be fully powered.[1]

When activated, the Sigma Harmonizer was capable of freezing all Soviet units and structures in the entire area in time. Units become unresponsive, and the construction and repair of structures pause, rendering them completely defenseless. However, Allied units were unaffected, and were able to use this chance to attack Soviet forces unhindered.

Despite its powerful effect, the Sigma Harmonizer was limited by its tremendous power consumption, and was unable to remain active for too long. However, as the Harmonizer gradually powered up, it was capable of stopping time for longer periods.[1]

The appearance of the Sigma Harmonizer is based on the real-world Large Hadron Collider, and the public fear of the project mirrors the fear that the LHC may create doomsday phenomena, such as black holes. 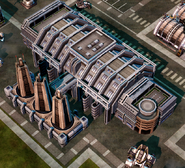 The Control Center of the Sigma Harmonizer

A section of the Sigma Harmonizer

The Large Hadron Collider, the real-world inspiration for the Sigma Harmonizer
Add an image to this gallery

Retrieved from "https://cnc.fandom.com/wiki/Sigma_Harmonizer?oldid=224621"
Community content is available under CC-BY-SA unless otherwise noted.