The Sigma Island was a heavily fortified FutureTech facility, which served as the heart of FutureTech's weapons production. It was also where the Sigma Harmonizer, the culmination of FutureTech's research, was located.

The Sigma Island was an enormous island complex, which housed multiple FutureTech Arsenals: advanced heavy-duty construction facilities designed to mass-produce powerful FutureTech weapons, such as the Future Tank X-1. However, these production lines generated massive amounts of heat, and required Cooling Towers to function at maximum capacity. It was heavily fortified, and was equipped with an Airbase equipped with radar-jamming devices, preventing enemy aircraft from entering the airspace.

The control center of the Sigma Harmonizer was even more heavily defended than the rest of the island, and was even equipped with a Proton Collider and a Chronosphere. However, the Soviet forces still managed to destroy the Harmonizer Control, ending Thornley's plans and exposing FutureTech's agendas to the world. 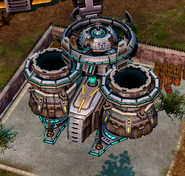 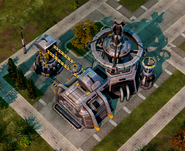 A section of the Sigma Harmonizer 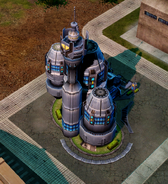 The FutureTech Estates
Add an image to this gallery

Retrieved from "https://cnc.fandom.com/wiki/Sigma_Island?oldid=224620"
Community content is available under CC-BY-SA unless otherwise noted.