The Signal Transmitter was an important battlefield building for the Scrin during the Third Tiberium War. Its primary role was summoning Motherships.

This bizarre, spiked building appears to grant Scrin Foremen access to the most advanced and dangerous air/spacecraft that the aliens have to offer, namely their Planetary Assault Carriers and foreboding, glacially slow Motherships. Notably, the Mothership will materialise wherever this building is placed when it is summoned, and while this construction does indeed allow the summoning of a Mothership, it still comes at great Tiberium cost. The building itself also consumes a reasonable amount of power. With this building the alien Foreman can call down support power called Overlord's Wrath and summon Wormhole that provide teleportation between two points on the battlefield for a short time.

During the alien's escape from earth, the Mission AI give briefing to Foreman 371: "While completing Threshold Assembly, the construction of Signal Transmitter is your only chance for survival Foreman. First priority, complete Threshold assembly". The Signal Transmitter then summon the Alien's Mothership to be teleported into the Ichor Hub with the Threshold Tower. 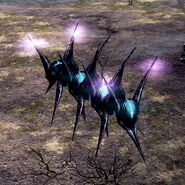 Other side
Add an image to this gallery

Retrieved from "https://cnc.fandom.com/wiki/Signal_Transmitter?oldid=214772"
Community content is available under CC-BY-SA unless otherwise noted.