The Brotherhood has always favored deception as a tool of warfare, and the Signature Generator reflects this idea. Mounted on the fast Venom patrol craft, these devices, when activated, emit a large number of radar signatures of varying intensity, fooling enemy radars into displaying a small fleet of Venoms as a large attack force, forcing the enemy to divert his forces to counter the non-existent army. However, these signature generators are naturally not equipped with holographic projectors, meaning that enemy forces arriving on the scene quickly realize that there were far fewer attacking forces than they had thought (on such occasions the Venom's expendable nature is most helpful).

These signature generators are not mounted by default on Venoms, but are available to commanders on request (upgrade, in the other word), providing they have constructed a Tech Lab capable of receiving and fitting the technology. However, in Kane's Wrath, the signature generator is researched at the Nod Air Tower. 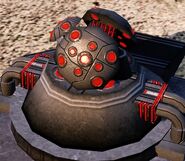 Signature generator pod at the Tech Lab (Tiberium Wars only)

Signature generator pod at the Air Tower (Kane's Wrath only)
Add an image to this gallery
Retrieved from "https://cnc.fandom.com/wiki/Signature_generator?oldid=220662"
Community content is available under CC-BY-SA unless otherwise noted.