Silencing Nikoomba is the first mission of the Nod campaign of Tiberian Dawn.[1]

﻿The Brotherhood of Nod had initiated a campaign to spread their influence far and wide into Africa. The initial stance of Libya's government in this conflict is unknown though it had supported Nod in the past. What is known is that Nod forces had recently moved into Libya and were keen on consolidating their power there in preparation for their assault on Egypt.

To this end they had identified key individuals with whom they were not in agreement. The Brotherhood believed that by eliminating such individuals they would be able to firmly secure their control over Libya.

One such individual was Nikoomba and Seth had ordered that Nod forces led by a rising Nod commander assassinate him. Nikoomba had taken refuge at a village in central Libya and his armed guards patrolled the surrounding area.

﻿In order to overpower Nikoomba armed guard's the Nod commander was given command of two buggies and a battalion of Nod soldiers. As the Nod forces headed towards the village where Nikoomba has taken refuge they had to defeat or evade his armed patrols.

﻿The village was on the other side of a bridge and the Nod forces had to fight their way across it in order to reach it. The village was full of civilians hostile to Nod and as they made their through the village searching for Nikoomba these civilians were probably slaughtered. Nikoomba however was not actually in the village but instead atop the cliffs immediately to the north of it but Nod still found him.

﻿He was unarmed at the time of his death. 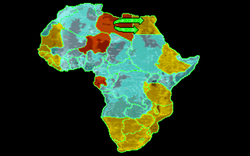 Nod would invade Egypt from Libya

Nikoomba's death disorganized local resistance to the Brotherhood of Nod and helped them secure their control of Libya. This in turn allowed them to gather their forces for an offensive on Egypt.

﻿The Nod Commander that had distinguished himself by killing Nikoomba was now redeployed by Seth to aid in the Liberation of Egypt. ﻿