Up to 5 Slaves (Automatic, no Cost)

Cannot be captured
Can only be repaired by Engineer

The Slave Miners were mobile ore refineries used by Yuri during the Psychic Dominator Disaster.

Instead of using machines to collect the ore, Yuri relied on human slaves equipped with shovels. Each slave miner usually carried five slaves to the nearest ore field where they started collecting ore and bringing it back to the miner where it was refined right away and turned into cash to supply the Commander's war efforts. When a slave miner was destroyed by an enemy, the slaves deserted and fought for whoever who ended their oppression. However, as they were equipped with nothing but shovels, they were mere cannon fodder. Killed slaves can be replaced with no visible cost, but slave miners had limited living space inside, allowing only five slaves per miner to be carried.

Despite its name, the Slave Miner is actually an ore refinery, although a mobile one. Due to the fact that it is usually outside of the base, it was equipped with heavy armor to repel enemy attacks against it as well as a machine gun to fight off infantry. It is the only vehicle that is so large that the Battle Fortress can not run over it.

Because of its dual nature, it is buildable by both the Construction Yard and the War Factory, allowing for rapid deployment of replacement Miners should any be destroyed. It requires no external power to operate.

The Slave Miner was erased from the timeline after the Soviets meddled with the space time continuum.

The only real vulnerability it suffered is that because it is usually outside of the effect area of the Psychic Radar and it is a refinery it had no way of detecting Allied Spies who could infiltrate it to steal half of the base's funds. Thus it required a Yuri Clone or Mastermind escort to defend against this tactic. A sniper or two nearby can also kill all the slaves, thus negating resource collection.

In addition, a SEAL in an IFV could terminate the slaves with little problem. Iraq's Desolators could also melt countless slaves with little difficulty. Any lost slaves will automatically be replaced by the miner without cost but this takes time during which resource collection is hampered. To counter a tank rush, a Yuri commander may turn his Genetic Mutator on a group of slaves to instantly obtain a force of Brutes. This can also become a lucrative source of funds as Brutes can be sent to a nearby Grinder for "reprocessing". Slaves assigned to a Slave miner are forced to follow its warden's will and thus will not receive direct command (except when liberated by destroying the slave miner).

One problem with the slave miner that sometimes occurred, albeit rarely, was in areas with heavy, constant radiation. These locations would prove instantly fatal to the fragile slaves, who would perish and liquify almost instantaneously after departing their parent miner. Because of this, Slave Miners were the only ore collectors of Third World War to be completely useless in irradiated areas.

The Slave Miner is unique in that it is a vehicle and a structure (but not both at the same time) meaning that it can be built from both the construction yard (where it is deployed as a building) and the war factory.

In each form it has all the attributes, advantages and vulnerabilities of that form. E.g. A deployed Slave Miner cannot be chronoshifted but can be blown up with C4 like other structures.  Undeployed, they can be chronoshifted just like all other ground vehicles (including onto water where it will instantly sink). There is one more issue with the slave miner: should the miner vehicle have to cross to move to a far away location but the slaves are left behind the mining operation couldn't be started. If this happen the slaves must be "decommissioned" by killing or mutating (into Brutes).

Slave Miners cannot be manually repaired unlike most structures.  To repair a miner, an Engineer must be sent to the miner or capture a machine shop where it can gradually repair while undeployed.

If the Slave Miner is sent into a Grinder while the slaves are outside, the slaves are made neutral (white in color) and will automatically attack anything nearby. 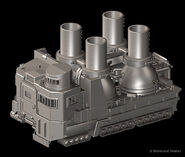 A render of Slave Miner with a unskinned 3D model

Icon with Chinese text
YR Slave Miner Textless Icons.jpg
Icon with no text
Add an image to this gallery

Retrieved from "https://cnc.fandom.com/wiki/Slave_miner?oldid=176985"
Community content is available under CC-BY-SA unless otherwise noted.