The Slingshot is a GDI hovercraft which served as a highly mobile anti-air unit in Kane's Wrath.

Unlike older HoverTech units, the Slingshot's hover chassis was less susceptible to Ion Storms, making the unit more reliable. With its use of HoverTech the Slingshot had light armour, but was very fast and highly maneuverable. It was designed to complement the Pitbull, as the former was only moderately good at shooting down aircraft.

The vehicle carried four 30mm autocannons mounted to the sides of its turret, guided with a high fidelity radar, and was capable of literally tearing through enemy aircraft with ease. Slingshot ammunition could be upgraded with Tungsten Shells, making it one of the most powerful anti-air units fielded in the conflict: just behind the Black Hand Mantis. Their autocannons do not have enough depression to be able to target ground units, however, though it was still capable of crushing infantry.

A group of heroic-level Slingshots were seen defending the covert GDI lab where they were keeping a complete duplicate of Nod's Stealth databank. Some were also airlifted in Chile in the failed attempt to stop the Black Hand from kidnapping Dr. Alphonse Giraud, GDI's leading Liquid Tiberium researcher.

The Slingshot was not seen in the Fourth Tiberium War, and appears to have been replaced by the GDI Sandstorm.

Slingshots are nearly useless for dealing with ground units because they cannot fire at anything on the ground. Aside of that, they serve adequately as AA units: functioning a lot like AA Batteries except being highly mobile.

A principal advantage held by the Slingshot is that it is the only mobile AA unit that instantly starts doing damage to whatever it is firing at; there is no actual time before its rounds start damaging its target. Therefore it is better at dealing with hit and run attacks than other mobile AA units since it's more likely to shoot down enemy craft before they can actually fire at it. It also does damage at a constant rate, not in bursts like most other units, allowing it to continue to damage enemy aircraft as efficiently as possible as long as they stay within its range.

High speed allows the Slingshot to get where it is needed quickly and efficiently, and its armor is also fairly respectable. Slingshots are GDI's best defense against units like the Nod Venom which excels at harassment, and are equally useful for dealing with the powerful and well-armored aircraft deployed by the Scrin. Their high speed allows them to be micro-managed against Devastator Warships relatively effectively, as they are fast enough to dodge or at least partially dodge volleys being fired at them from one.

While the Slingshot is incredibly powerful when dealing with aircraft, Vertigo bombers and Devastator warships have enough firepower to destroy Slingshots easily if they get in some of the first hits. Slingshots were unable to detect stealth units.

Interestingly, even designed only for anti-air purposes, a Slingshot can actually eliminate large amount of enemy infantries by simply running them down, thanks to its speed and maneuverability. Such a tactic is utilized by many GDI commanders, especially when battling Nod opponents.

Unskinned render
Add an image to this gallery 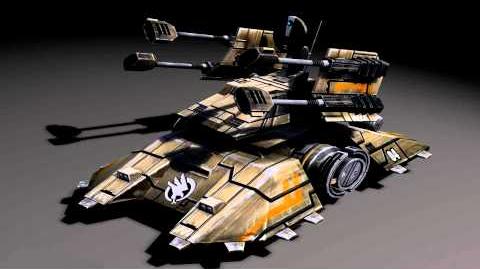 Retrieved from "https://cnc.fandom.com/wiki/Slingshot?oldid=231299"
Community content is available under CC-BY-SA unless otherwise noted.