Slingshot is a long-range anti-aircraft vehicle. It can easily shred through light aircraft, especially drones. Against heavier aircraft Slingshot will do significant damage before they can even close the distance. Alone will not be able to stand against bombers or anti-vehicle tech aircraft.

The long-range allows it to support other ground units in a fortress without a need to chase down the targets.

Slingshot is vulnerable to all anti-vehicle ground units. Leaving it alone in the field is a sure way to lose it. Placing ground units in front of the Slingshot can protect it from ground threats while the Slingshot keeps the sky clear.

The inability to target ground units makes Slingshot only good for holding pads when there are no air units to target. If a more versatile anti-air unit is required, Pitbull is a better alternative. 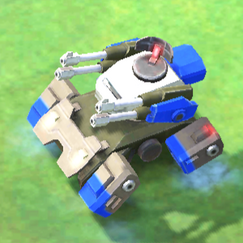 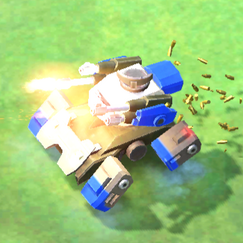 Concept Art
Add an image to this gallery

Retrieved from "https://cnc.fandom.com/wiki/Slingshot_(Rivals)?oldid=240963"
Community content is available under CC-BY-SA unless otherwise noted.