Does not reveal position when attacking

Snipers were elite SAS operatives aiding the Allies during the first and the second iterations of the Third World War, excellent at eliminating enemy infantry from afar.

Armed with a high-caliber bolt-action rifle, SAS snipers are among the greatest infantry killers of the war, having an effective range far greater than that of standard infantry units, and even that of Yuri's specialized snipers, the Viruses. The sniper was also a master of stealth, being able to kill enemy infantry at long range without revealing his position.

Though no man could survive being in a sniper's sights for long, the round lacked the power to sufficiently damage vehicles or structures. Combined with the sniper rifle's slow rate of fire, the sniper was at a disadvantage in close-ranged firefights.

To increase survivability, snipers could be deployed inside an IFV, enhancing their speed and rate of fire. 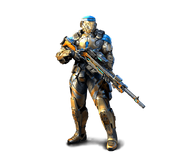 Retrieved from "https://cnc.fandom.com/wiki/Sniper_(Red_Alert_2)?oldid=240115"
Community content is available under CC-BY-SA unless otherwise noted.