A GDI sniper team was a specialized combat team in Tiberium Wars and Kane's Wrath, whose role was reconnaissance and infantry removal. One sniper team was comprised of two members - a sniper and a spotter.

A squad will typically comprise of a sniper with advanced marksmanship training[1], and a more experienced team leader who also serves as a spotter (leading to amusing quotes when left alone in the field if his partner is killed).

The sniper carries a large-caliber, long-range, scoped and silenced GLS-70[2] rifle with a laser sight, while the spotter is equipped with a GD-2 spotting scope and communications equipment for communicating with HQ and relaying target data for GDI Juggernauts and battleships, both of which can continue bombardment as long as the Sniper Team is in the target area.

The team wears battledress uniforms and camouflage hats. They don't wear armor, as it would limit their mobility and increase their chances of being seen. When stationary, they go prone.

They can pick off enemy infantry from an impressive range, and several teams in one spot can devastate entire formations. However, when they come within visual range of base defenses or stealth-detecting vehicles, their cover is compromised.

Their rifles instantly kill any infantry-regardless of armor type, even heavily armored elites like Zone Trooper and Enlightened. Thus, their effectiveness depends solely on how many individual infantry must be eliminated. This means that snipers can insta-kill commandos, but are very slow at taking out militant squads. A common tactic used by GDI players employing massed Predator rushes is to use snipers as support to deal with anti-tank infantry.

Sniper teams have a few downsides. They are vulnerable to any anti-infantry weapons once they have been detected, and Venoms are an especially dangerous threat. This is because the flying Nod Venom has stealth detection systems and can quickly dispose of the snipers once they've been revealed. They are also expensive to train at 1000 credits per team and can be overwhelmed by masses of low tier infantry-especially militant squads (given the comparatively slow rate of fire). They are also completely vulnerable to aircraft, especially Venoms and, to a lesser extent, Stormriders. It is highly recommended that the Snipers be escorted by Anti-Air units such as Pitbulls, Slingshots, APCs, or Missile Squads (preferably loaded in APCs, as Venoms can easily kill them also), although this may compromise the Sniper Team's cover.

Sniper teams, as mention above, can act as spotters for Juggernaut Mk. III walkers, allowing them to bombard targets inside the team's sight radius. Note, however, that the team will briefly become visible (unstealthed) when giving the Juggernaut targetting data - this can have disastrous consequences. Sniper teams can also spot targets while garrisoned in a Hammerhead. However, only sniper teams trained from the barracks can do that - Sharpshooter teams cannot.

They are at their best in a section of 3 to eliminate higher tier enemy units who lack the range to return fire (Black hand operatives, Shock troopers, etc) or against single high value enemy units (Engineers, Saboteurs, Assimilators, rampant Commandoes, etc). Otherwise, they are safer garrisoned in buildings, APCs, or simply protected behind other units.

Like all infantry, the Sniper team can be shuttled in V-35 Ox transports, and a special, veteran sharpshooter team of 3 teams can be deployed on the battlefield.

Unless commanded otherwise, snipers will not engage enemy forces unless they are detected (which then will attempt to eliminate the threat that discovered them, usually failing) this makes them good at watching over key areas and monitoring enemy movement, and detecting any stealthed units. However if garrisoned in a structure, they will shoot infantry on sight and lose their stealth detection ability. If sniper teams are garisoned with anti-air/anti-tank squads then this can be an adavantage for stopping enemies that capable of clearing out structures from getting too close.

Sniper Teams are a useful passive counter for Vertigo Bombers, as they can be placed further away from AA defense, and expose the Vertigo Bombers prematurely, making it easier for the defenses and units to kill them before or after deploying their payload. 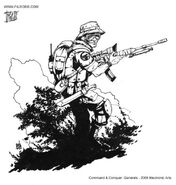 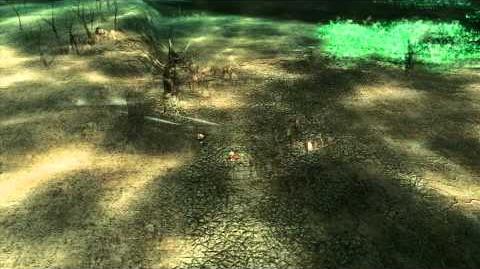 •The sniper will pretend to shoot a bird in the sky.

•The spotter will reload his gun and check through sights.

•The spotter looks up into the sky to bird watch.

•Either member may throw a rock.

•Members may do sit-ups.

Retrieved from "https://cnc.fandom.com/wiki/Sniper_team_(Tiberium_Wars)?oldid=230971"
Community content is available under CC-BY-SA unless otherwise noted.