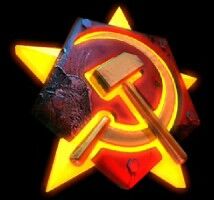 Comrade General, this page is a quick summary of the arsenal of the Union of Soviet Socialist Republics from the Second World War through to the Third World War. Click on the relevant links to find out more about the units and structures listed here.

All Soviet infantry are trained from the Barracks.

All Soviet Aircrafts except the Badger bomber can be built by a Soviet commander at the Airfield.

All Soviet naval units are built at the Naval Yard. Note that Bullfrogs, Soviet MCVs, Sputniks and Ore Collectors can also be constructed here.

Soviet structures are built from the Construction Yard or the Crusher Crane. All structures can be deployed both on land and water except the Barracks, War Factory (land only) and Naval Yard (water only).