The barracks were the Soviet infantry training structure during the first and second iterations of the Third World War. They were a relatively narrow structure, with a large statue of a conscript standing attention atop it. They are designed to inspire pride and awe of the Union in the infantry recruited from it, and to be small and confined enough to serve its purpose without taking up excessive amounts of space. 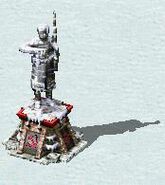 Retrieved from "https://cnc.fandom.com/wiki/Soviet_barracks_(Red_Alert_2)?oldid=226674"
Community content is available under CC-BY-SA unless otherwise noted.