The Soviet war factory was the Soviet vehicle production facility during the first and second iterations of the Third World War.

The Soviet war factory is a roughly rectangular structure, containing fabricating machinery capable of constructing, but not repairing, Soviet vehicular units. It has a large double door on the front, through which vehicles as large as an Apocalypse tank can fit, and a large sliding bay door in place of the roof, such that air units could be produced from the war factory.

It was redesigned by the third iteration of the war, but was no longer able to produce aircraft.

The Soviet war factory can produce the following: 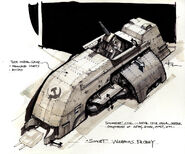 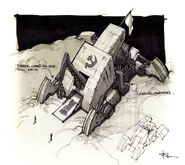 Icon with Chinese text
Add an image to this gallery
Retrieved from "https://cnc.fandom.com/wiki/Soviet_war_factory_(Red_Alert_2)?oldid=224711"
Community content is available under CC-BY-SA unless otherwise noted.