The structure allows terrestrial GDI commanders to communicate with their contemporaries in the GDI space forces. It is essentially a large launch pad (and support facility) for shockwave artillery missiles, coupled with a powerful communications center that maintains an uplink with GDI space command for further strike support. With the addition of new satellites to the system, the space command uplink was able to call for an orbital strike upon a target, raining down a hail of kinetic impact rods.

It grants a commander three important aids, the first being the ability to launch shockwave artillery ballistic missiles, based on sonic emitter technology, at foes across the battlefield.

The second is the ability to call in Zone Trooper drop pods from space to land at any location. After a brief cooldown time following re-entry, three squads of veteran Zone Troopers will be at the commander's immediate disposal in the drop zone, allowing for the ultimate in surprise attacks.

The third is its large sight radius - placed near the front of the base, it can allow a commander plenty warning as to any unstealthed units approaching his or her base and thus plenty of distance to decide how to deal with it accordingly.

In Kane's Wrath it can also call down orbital strikes and supersonic air strikes. If the player is leading ZOCOM forces, then Zone Raiders will be deployed instead of Zone Troopers. 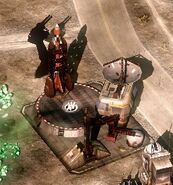 View from the top
Add an image to this gallery
Retrieved from "https://cnc.fandom.com/wiki/Space_command_uplink?oldid=214664"
Community content is available under CC-BY-SA unless otherwise noted.