The Specter artillery is one of the primary tools of the Brotherhood in the wake of the split after the Firestorm Crisis.

Developed during the Second Tiberium War period, Nod's Specter stealth artillery vehicle was designed as the ultimate evolution of the artillery-based guerilla warfare tactics first developed in South-East Asia during the mid-twentieth century. Alternating between two modes, one high-speed and stealthed, the other visible and static, but capable of launching high-impact artillery from a massive distance, the Specter is a confounding opponent to face in battle. Able to enter occupied territory undetected, deploy, take out key structures and vanish before the enemy can hope to react, it is truly an insidious and dangerous opponent. This is even more the case when the unit is paired with the equally stealthy Nod Shadow Team, which has been equipped with targeting beacons, allowing the Specter to launch bombardment from an even greater distance.

The Specter was succeeded by a more advanced variant by the time of the Ascension Conflict, which does not need to deploy before firing.

Essentially a lightly-armored tracked vehicle with a large caliber cannon mounted on its top, the design of the vehicle seems to be based on the scorpion, Nod's traditional symbol. In order to fire, it needs to deploy itself by spreading six "claws" that provide a stable platform for the large caliber weapon. In order to allow it to safely reach its destination and prevent premature detection by enemy scouts, the Specter, as its name suggests, is outfitted with a state-of-the-art stealth generator. The high impact shells fired from the cannon follow a high-arc trajectory and do tremendous amounts of damage, especially against structures, with a large blast radius. Care should be exercised when using the Specter, lest there be friendly fire incidents due to the large blast radius from its shells.

Under Marcion, the Black Hand removed the stealth generators from their Specters, as the Black Hand's religious doctrines forbade the use of stealth.

Nod Shadow Teams can interact with these artillery units and deploy a beacon to accurately guide their fire, like the GDI Sniper Team and Juggernaut. The beacon, however, reveals itself as it transmits the coordinates, leaving it vulnerable to being destroyed. Interestingly, so long as a single beacon is activated on the local battlefield, Sniper Teams under Nod control can also spot for a barrage. The Specter itself has a long deployment time, during which the stealth generator must be deactivated, leaving it vulnerable to attack.

The Specter is available to all Nod sub-factions, but require the presence of a Tech lab to be constructed. Also, Black Hand Specters do not have stealth capabilities.

This artillery unit acts similarly to the Advanced Artillery in using an accurate big gun that does massive damage and required to deploy in order to fire, the only difference being that it can use its stealth generators to evade patrols, or escape from hostile units. It is similar to the Nuke Cannon in Generals, used by the PLA. 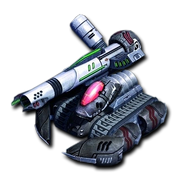 A group of Specters firing
Add an image to this gallery 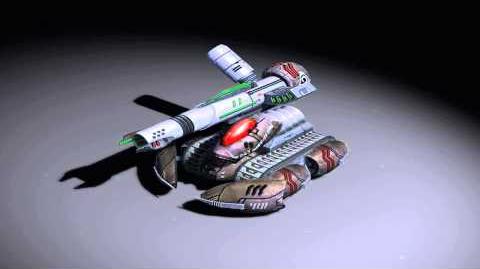