The Spider tank is a fast Tier 1 Offense Class Light unit in service of the Brotherhood of Nod.

The Spider is a beetle-like, quadruped (with wheels on each leg) vehicle which is armed with a small laser weapon. It's most important ablity is the Laser Web, which allows it to link with other Spider units. This causes a web to form between the group. Any units trapped inside the web will take continual damage while they are inside the web. Nod has not declassified any information on its deployment or development history, however.

Spider Tanks cost only 3 CP each (the same as an Engineer) and can be massed to effectively attack larger units. While not strong individually, as a group, they can be a force to be reckoned with, especially in close quarters, where their network ability isn't wasted. The Burrow ability combined with Laser Web can be very devastating, especially against slow Tier 3 heavy units and Crawlers. They are best combined with Raiders, due to the Spider Tank's inefficiency towards infantry and light vehicles. They are also very unexpectedly efficient against aircraft when in larger groups.

They are, however, not very effective versus units that use Blast damage when in large numbers, Like the Kodiak because the blast will damage all Spider Tanks in the group, and thus rapidly reduce health. This can be annoying when fighting units like the Juggernaught and Firehawk, and even units like the Mastodon and Kodiak. The flaw can be offset by micromanagement, which you will want to use anyway to maximize the laser web. In addition, they can attach themselves to the Nod Widow to increase the Widow's firepower, armour and rate of fire. Their closest GDI equivalent is the Striker.

An achievement can be earned if the player uses its laser web to destroy several targets.

Cut 'em off at the knees! 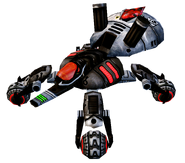 Retrieved from "https://cnc.fandom.com/wiki/Spider_tank?oldid=237648"
Community content is available under CC-BY-SA unless otherwise noted.