The Spy plane was a special aircraft used for surveillance role during the Psychic Dominator Disaster. It is called to the battlefield as a support power.

During the Third World War, the Soviet Union did not find a need for Spy planes, as their psychic corps granted them equal intelligence gathering ability. The Allied treaty also disabled the Soviet Air Force.

Following Yuri's defection however, the Soviet Union needed a way to undertake field reconnaissance without the need for psychic powers. They eventually settled upon bringing back a fast, hard to intercept spy plane. As Russia had ceased the development of field airstrips, the Spy Plane was built and maintained away from the battlefield.

The spy plane would take off from a distant runway at high speed, fly over the designated area, and take a few snapshots. These would be transmitted to a commander's terminal, and the topography of the immediate area recon was requested for would be revealed. If the unit is getting an AA shot outside its recon range additional footage and information about the AA battery in firing will also be added to the commander's map.

The spy plane did not appear in Red Alert 3.

While the area revealed by the recon photos was decently sized, the Allied Spy Satellite Uplink was still superior. However, the ability of a spy plane to be serviced fairly quickly allowed it to even the odds in terms of intelligence gathering.

Though its speed gave it a relative degree of invulnerability, massed AA still could get lucky and shoot a Spy plane down. When the crashing spy plane hits the ground, it will cause splash damage to enemies, but it can still cause friendly fire. The plane design is differ from its predecessor, which is a fast recon jet. This spy plane is much more armored, capable to shrug off damages until the engines fail. Many commanders used this feature to cover another air mission, either a strike, paradrop, or infiltration. 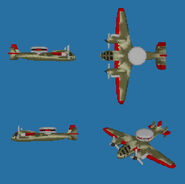 The Spy plane resembles a Heinkel He 111 - one of the most produced German medium bomber in WW2, which was also used for reconnaissance purposes. But its more likely to be based off the Russian DB-3 or IL-4. Despite being Russian, it's tail section does resemble that of the American Grumman OV-1 Mohawk Reconnaissance Aircraft.

Retrieved from "https://cnc.fandom.com/wiki/Spy_plane_(Yuri%27s_Revenge)?oldid=240094"
Community content is available under CC-BY-SA unless otherwise noted.