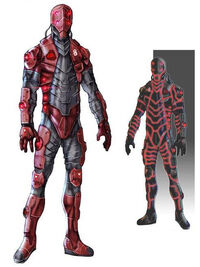 The Ezekiel's Cape[1] stealth suit is a marvel of Brotherhood's optical camouflage.

By scaling down and redesigning the Lazarus shield generator of the stealth tanks, Nod scientists were able to create a powerful suit of armor powered by an internal reactor that was capable of rendering the wearer almost completely invisible in broad daylight by refracting light. The armor is equipped with a special four-visor helmet designed to not interfere with the stealth bubble generated and the vision not corrupted by it.

This suit was only worn by specially trained stealth soldiers in Renegade.

Retrieved from "https://cnc.fandom.com/wiki/Stealth_suit?oldid=141288"
Community content is available under CC-BY-SA unless otherwise noted.