Takara Sato is another of the new commanders introduced in the Uprising.

She quickly rose up to become a strong leader for the newly-founded Imperial Final Defense Force. Takara's experience as the former Chief of the Rocket Angel's First Battalion in surprise assaults made her an exclusive target. She prides herself for being an increasingly painful thorn to the Allies.

Takara is an Imperial Commander during the Command & Conquer: Red Alert 3: Uprising period. Takara has a floating fortress in her possession, outfitted with another Imperial technological abomination: cloning, used to significantly augment the Empire's insignificant fighting population - Yuriko Omega being one of them. Interestingly, it isn't the only fortress at her disposal, as she had another, covered in Wave-Force Tri-Cannons.

Takara takes part of the Uprising led by Shinzo in the Allied-controlled Japan. To fight the Occupation Allies force, the pretty shogun establishes a strong resistance in her province. Tatsu believed she could inspire immense trust and bravery in her samurais. Nonetheless, the Allied Commander and Tatsu brought her down although she was not killed and claimed she was going to change all her plans. It is possible Takara replenished her strength by regrouping her warriors and formed a unified force with the Japanese Shogun to continue their rebellion against the Allies.

Also Takara is a friend of Yuriko and it is possible that after the return of Yuriko to Japan, the beautiful Takara may have tracked Yuriko to persuade her to fight against the Allies once more.

She first appears in "All Guns Blazing" where she welcomes the Commander to her island fortress and tells them not to worry about the decks guns as they are harmless. When she was defeated, she tells the Commander that she thought he would be easier.

She appears next in "The Omega Program" where she tells the Commander that he/she has come to visit her on Sato's new island fortress. After greeting the Commander, she tells them that she is going to send her friend Yuriko Omega to visit them though she might bring some of her friends along. When she is defeated, Sato demands to know what happened to all her Yuriko clones and angrily states that she should have won that battle.

During "Cat Fight" she appears in a free for all against the Commander, Lydia Winters and Vera Belova. At the start, she tells the ladies that its her island and she doesn't remember them being on the guest list after which she tells them to leave immediately. When one of the opponents is defeated, she says that it was someone who could not handle a fight and that she was still there after which she tells the Commander that he better be ready for another round. When Sato herself is defeated, she happily says that she doesn't mind getting beaten so long as the other opponents get beaten as well.

In the mission "Scavengers" after hearing Vera Belovas message that there are husks of tanks waiting to be reclaimed, Sato says that her scouts are already there and that the Commander better not be in her way.

In the Mission "High Seas Duel", Takara challenges the Commander to a one-on-one duel of armies in the navy, asking if the Commander would like to 'play in the water with her' as it was 'nice and warm'. After a fierce navy-only battle, Takara, defeated, commented, "And I thought I was going to have a nice day at the beach."

Her final appearance was in the mission "Fury of the Empire", where she deployed several Giga Fortresses immediately, in both Sea and Sky form, to stop the commander. Upon defeat she, visibly irritated, commented "Fine, take the Giga Fortress, it didn't help me".

While the original co-commanders were fought in the order they appeared in Red Alert 3, Takara took the place of Naomi Shirada. It is unknown why Naomi did not make an appearance, but it is likely that the portraying actress simply could not be reached. The same is true for Lissette Hanley and Zhana Agonskaya. 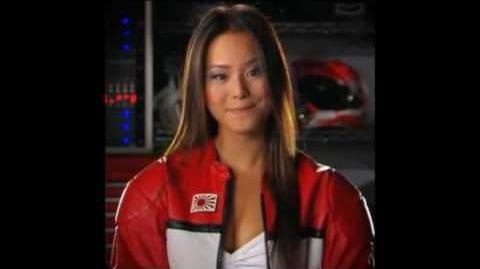 Retrieved from "https://cnc.fandom.com/wiki/Takara_Sato?oldid=231065"
Community content is available under CC-BY-SA unless otherwise noted.