Where is the Destroyer in the Tiberium Wars? Just put the fact the Gunboat replaced it due to Destroyers are costly on cash.

NO. There is no evidence suggesting that the Destroyers would be totally replaced. Shaur M. S. Grizlin 09:06, 30 October 2007 (UTC)

The Arleigh Burke class has a distinctive superstructure, and the Allied destroyer definitely doesn't not match it. I wouldn't say it's a Kidd or Spruance class either....the ship in the cutscene is probably just made up Lalala la 10:54, 17 May 2009 (UTC)

The destroyer in the cinematics looks real enough (not to be mistaken for the Iowa class battleship, which the cruiser portrays and not the destroyer). The game designer couldn't have possibly drew it up all by himself (other than that missile box on the ship's bow which is obviously ridiculous). Perhaps the destroyer is either British, German or French which we haven't checked and not a US Navy ship? 220.255.7.231 17:09, April 10, 2010 (UTC)

Just an update as to determing this ship's nationality and class, I looked through a list of ships of the Soviet Navy and to my surprise, I found at least two which bear striking resemblences to the destroyer in the cutscenes (no bow turret & probably a few similarities). There is no missile box on the bow but rather a missile rack. Anyone willing to help please take a look at the following images of these ships and judge for yourself: 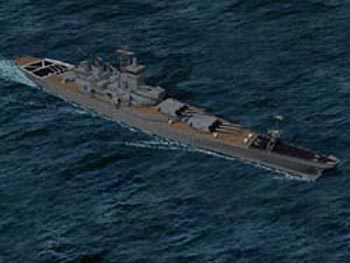 Look at the missile launchers that have been modified onto it. Also, the icon is exactly as it appears in the game.

Retrieved from "https://cnc.fandom.com/wiki/Talk:Destroyer_(Red_Alert_1)?oldid=210945"
Community content is available under CC-BY-SA unless otherwise noted.