The MARV seems to be based on one of the many Westwood concepts for Tiberian Twilight, specifically the Mammoth Tank Mk. III. Shaur M. S. Grizlin 20:27, 11 January 2008 (UTC)

Thats False, The "Mammut MKIII" was actually the Mobile Defensive Plattform, you mean maybe the Mammoth MK3 from the Tiberium MMORPG,a Game which is set the Post-firestorm crisis (was canceled, too)... Ishmael, a former WW designer, has sayed it was NEVER planned a epic unit, and Tiberium Twillight was NEVER the worktitle of Westwoods C&C3, instead, they called it "Tiberium Incoursion" ... look at the Mobile Defense Platform prototype article 1950Nash1987

1950drnash1987: Thanks for the editing of the MDP article. I think the continuum Mammoth looks more like a prototype, because in Incursion, it was maybe replaced by the MK3, and the MDP, thats my opinion. 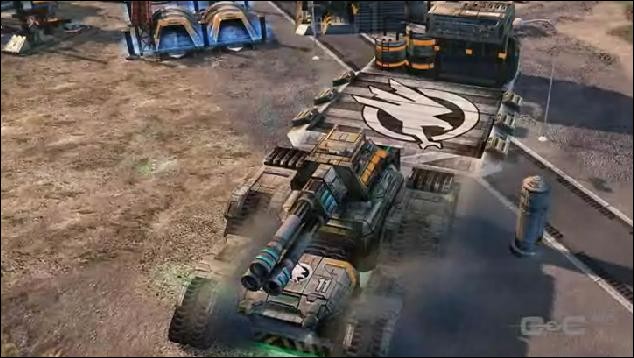 dude, can you see 11 barrels of hell mounted on the MARV? Cause I can clearly see three sonic cannons and some kind of gas station or whatever to the right of it.... Legandary Insurgent 18:06, March 23, 2010 (UTC)

"11 Barrels of Hell" is the signature line of the Baneblade from the Dawn of War (Warhammer 40K) series, which is of similar proportions and appearance.

So - what kind of artillery does this beast carry - triple railguns or triple sonic cannons? Anyonre already played Kane's Wrath?

Not sure, but that's what I was about to ask, from what it looks like they're too fast to be a sonic weapon, not to mention that the MARV ejects a shell when it fires. - EchelonThree 09:37, 4 April 2008 (UTC)

Its a Sonic cannon, and a rather big one. i belive ive seen it on the trailers; it shoots some blue groundpounding things. they do a little bit more damege then the normal sonic cannon, and have a better reload rate thanks to the three barrels. Deaths 18:26, 31 May 2008 (UTC)

It also carries some pods which infatry can permantly garrison to uppgrade the MARV. The bad thing with it is that it perhaps is the worst epic unit. Altough with uppgraded railguns or missiles, it can at least take on an Eradicator.Legandary Insurgent 17:29, March 23, 2010 (UTC)

The difference comes during army battles. Mono y mono it is the weakest epic unit, but it has the most hardpoints and therefore the most potential for additional guns and it can hit several units at once. BTW, the MARV has a longer reload time after every third shot. Heroic MARV's fire those three shots in about 5 sec. Those AOE shots can destroy almost any formation. With an army, redeemers lose to MARV's because the MARV is killing the Redeemer's support units with every shot. -AoBzealot0812 15:44, June 15, 2012 (UTC)

numbers that can be built

are you only allowed one of these bad boys can you deploy.

You can't build just one Epic Unit. You can build one Epic Unit per base. If you build a second base, and you already have one Epic Unit, you can build another Epic Unit at the second base. Continue down this path, and you can have three, four, or even five Epic Units ready to totally destroy your enemy, especially if all of them are filled with Zone Troopers or ZOCOM Raiders.

I believe some of you have figured that you can only control ONE epic unit from each faction (not sub-faction) so that discussion should be ended with thatLegandary Insurgent 17:31, March 23, 2010 (UTC)

Wait, what? That's not the case at all. You can totally build one epic per sub-faction, for a total of nine epics. I know this because I marched a pair of Redeemers (One Black Hand with a pair of flamethrowers and one Marked of Kane with a pair of rocket launchers) against the Scrin just yesterday. RomeoReject 22:19, June 19, 2012 (UTC)

The MARV has only three barrels, not eleven. And all three of those barrels can turn an enemy base into a smoking hole in the ground. Yes, the MARV has four hardpoints, and if you fill them up with Zone Troopers, you can turn the MARV into a killing machine.

Good point, but there you should think on what you are doing there. Four ground weapons and no anti-air weapons? You should at least consider uppgrading a MARV with two rocket pods so you are at least able to shoot back at a PAC Legandary Insurgent 17:33, March 23, 2010 (UTC)

...Yeah no. Two rocket pods aren't going to scare off the Scrin Victory fleet, let alone a pack of Orcas. You'd be better off garrisoning with full Zone Troopers or Engineers and leave the anti-inf and anti-air to more suited support units (APCs, Hammerheads, Slingshots, Firehawks)... unless your support units get wiped out or something. BlackHand751 01:08, June 27, 2010 (UTC)

I want to see screenshots of infantry weapon upgrade of MARV.

Can anyone upload them? (Remember, ingame screenshots only!)

I can't believe this freakin thing got defeated quite easily. GDI is the ones with high firepower and versatility but the MARV was defeated by Eradicators, Purifiers, Avatars, other Mammoth Tanks and Annihilators. THIS THING WAS THE GDI EPIC UNIT! IT SAID IT WOULD BE BASED ON THOSE SOVIET SUPER TANKS NOT BE A WEAKLING DEFEATED BY NUMBERS OF SMALLER UNITS LIKE AVATARS! BE GDIS TOUGHEST WEAPON NOT HAVE WEAK FIREPOWER! THIS THING HAS THE POWER TO TURN RED ZONES EVEN TIBERIUM GLACIERS INTO BLUE ZONES AND I TRUSTED THIS MONSTER TANK UNTIL IT WAS DEFEATED QUITE EASILY BY TWO ANNIHILATORS!

Also when this thing shoots its huge emitter shells at the Purifier it did not do very good damage unlike the Redeemer which was powerful.

Hey, just for a reminder. If you have readed all the GDI intel from tiberium wars then you should know that it is the Commando which is GDI`s best unit. Perhaps not most powerfull but the best anyway. Second, two Annihilators could easily killed a Redeemer and a Hexapod as well with a MARV due to their EMP. Third, a Redeemer can be matched by 4 avatars because the Redeemer`s fire rate is slow as hell compared to the rate of a MARV. Btw, the next time you encounter two annihilators then move backwards and keep shooting. If you encounter Avatars or mammoths I have one thing to say to you......Roll over them Commander-_- Legandary Insurgent 17:53, March 23, 2010 (UTC)

If your MARV is losing to enemy armor, combine zone trooper and engineer garrsions for ultimate anti-armor. Also, the MARV does AOE damge in a circle, always fire on the unit in the middle to increase effective damage. -AoBzealot0812 15:44, June 15, 2012 (UTC)

Hi, the point that the MARV can convert red and yellow into blue zones is very intersting, but is it actually based on any kind of in-game fact?

Sign you posts. And second, it's a safe inferance due to the fact that it [i]is a giant harvester[/i], and since ZOCOM's job is to reclaim the planet from Tiberium, it is a very safe bet to say that one of it's jobs is to remove Tiberium and thus turn more of the planet back to Blue Zone status. Luke Danger 19:53, February 11, 2010 (UTC)

"Based on any in-game fact"? Its rather simple. The MARV is a giant Harvester/Mammoth designed as a mobile Tib factory. ZOCOM knewed that due to the heavy assaults from mutant separist groups and Nod forces foolish enough to counter it with Millitia men. In the cutscene to the mission "MARV Rising" the transmission from "our brothers in field" provided vital information on the existance on the vehicle. Btw, do you guys remember the picture of the Avatar crushing a Predator tank? I think the Redeemer should have been able to stamp on the tank just to show the power (and resources of Nod) Legandary Insurgent 18:02, March 23, 2010 (UTC)

I'm about five years too late here, but it's definitely ARMORED, not ARMED. Seriously, did nobody bother to check the intelligence database or the official interviews in all these years? Ssskoopa (talk) 05:42, January 16, 2017 (UTC)

Kovacs uses "Armed" in the cutscene, and if my memory is correct (it might not be), the objective description refers to it by that name as well. Bottom line is, the game uses both.Narve (talk) 16:21, January 17, 2017 (UTC)

Well... Shit. I guess EA fucked up once again. Still, the A stands for Armored in both the database and the official interviews, so I'm pretty sure that's what they intended originally. Ssskoopa (talk) 01:13, January 18, 2017 (UTC)

One, the article seems to be wrong when it says that the MARV gets less resources than a reg Harvester. I was making the full 350 per when I ate up some green Tib with it. (EDIT: Also changed in update. I really gotta make sure I got the newest patches before I start commenting :P) Waladil 16:23, August 15, 2010 (UTC)
Two, I don't know how or why, but I had an epic glitch. In a Global Conquest game, at first MARVs would ungarrison all the infantry between battles, but I then had a MARV that didn't, but could garrison four MORE. This was a Heroic MARV with the following garrisoned units: (Numbers in parenthesis are estimated. Since the images were overlapped it was kinda hard to tell what it had)

I'm about to test if this glitch keeps coming, but this tank is out of the world. Fast self-repairing (between Heroic rank and the at-least-three engineers...) and uber DPS, nothing could touch it that last battle. Now I need to see if this keeps going so I can eventually get a MARV with forty infantry inside... 130.245.198.248 04:20, August 15, 2010 (UTC)

EDIT: Most of my MARVs dont seem to be keeping their units... but this one does. I made this screenie so you can WITNESS THE GLORY!

Well, aside from the fact that some are not visible because their turrets are overlapping an identical turret (I know that there are at least 5 engineers in there...) this is the current count of visible turrets:

Now I need a tier 3 base... and watch it crumble.Waladil 06:01, August 15, 2010 (UTC) (P.S. If one of you wiki-smart people wants to, feel free to make my image smaller with one of those "click on the image and it makes a box show up" things going on. Wikis aint really my thing, so I dunno how to work those.

The MARV, and possibly the Redeemer and Eradicator, has a glitch when it levels to heroic. The cannon has no red to it and the infantry are red then instantly turn to normal color, tested with 4 missile squads on Crater of Carnage during my missile squad unit spam test. BTW, that MARV was unkillable by armor and only Reaper-17 was in game :) -AoBzealot0812 00:56, June 13, 2012 (UTC)

It hapenned again while I was doing the sniper team one but the heroic red worked on zone troopers, tested with four of the respective type on crater of carnage -AoBzealot0812 15:32, June 15, 2012 (UTC)

The MARV: A Breakdown

The GDI MARV is GDI's epic unit, and probably the most annoying to use. It may give 350 resources, but it can half your tib fields if you don't use waypoints to make the MARV go around. If you are passing the field to secure it from an enemy on the other side, this is especially annoying. Additionally, it's hardpoints are the highpoints of it's damage dealing ability. Four riflemen can obliterate infantry, four missile squads can send a harassment team of stormriders packing, four engineers make it nearly unkillable, four grenadiers make short work of infantry and garrisons especially, four sniper teams can pick at infantry rapidly, four zone troopers can make vehicles feel an intense mortal terror, and four zone raiders make the scrin run for the nearest escape ship.

The MARV, however, is best used without competition of enemy epic units and equipped with the following:

Retrieved from "https://cnc.fandom.com/wiki/Talk:Mammoth_Armored_Reclamation_Vehicle?oldid=214235"
Community content is available under CC-BY-SA unless otherwise noted.