The Talon is a GDI vehicle in Tiberian Twilight.

The Talon is basically a dual missile launcher similar to that used by the Zone Defender of the GDI Defence class mounted on a small hover chasis.[1]

The Talon is the only missile-armed unit available to the Offense Class at Tier 1. It is available from Level 1 and does not need to be unlocked. Talons are particularly useful against Nod's Support Class's Cobras and Scalpels, which are highly vulnerable to rockets. In addition to that, their relatively good speed and especially the ability to cliffjump makes them excellent hit-and-run units.

Talons are lightly armored and can easily be damaged and destroyed by any weapon. Area-damage and anti-vehicle weapons are its most lethal opponent.

Talons may receive the Missile Storm upgrade, which gives their rockets a small splash damage area.

Unlike the Sandstorm, an upgraded Talon's missiles remain as accurate as before, and do not require switching modes. However, they also do not gain a rate of fire boost. However, Talons can still be more effective because they cost only 3CP to the Sandstorm's 6CP, and if built in larger numbers are usually still more powerful.

Achievements can be earned if the player uses the Talon to kill several units including a heavy aircraft. 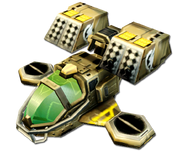 Render
Add an image to this gallery
Retrieved from "https://cnc.fandom.com/wiki/Talon?oldid=237635"
Community content is available under CC-BY-SA unless otherwise noted.