The shards are located in a sealed ammunition magazine, making the weapon capable of being employed by any kind of field personnel without protective equipment and meant to be used against infantry. A gas cartridge is stored visibly on the back of the gun which is used to propel the shards.

The Tiberium flechette gun is essentially a powered-up version of the automatic rifle. While doing minimal damage if only few shots are landed, it is capable of massive damage if the user scored multiple headshots. 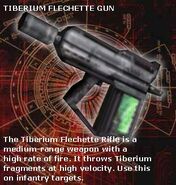 Retrieved from "https://cnc.fandom.com/wiki/Talon_Tiberium_flechette_gun?oldid=206915"
Community content is available under CC-BY-SA unless otherwise noted.