The German tank destroyer was an Allied anti-armour tank during the first and second iterations of the Third World War.

It has a large anti-tank cannon mounted on a flexible, tracked platform, which is capable of easily destroying enemy tanks, even punching through the heavy armour of Apocalypse tanks and ore miners. However, the tank destroyer was strictly capable of providing anti-armour support, as it was nearly useless against infantry or structures. It was also relatively lightly armoured and unable to attack air units. They can still lose to Apocalypse tanks in one-on-one matches, making them better to use in large groups against vehicles.

It is not known to have operated after the events of the Psychic Dominator Disaster.

The UltraAP damage type deals full damage to units with light and heavy armour, less than half damage to medium armour, and barely any to everything else; hence, the tank destroyer's weapon is efficient against vehicles, but not infantry.

The AI usually attacks with 4 tank destroyers. They prioritize enemy vehicles above all other targets, and will completely ignore any building or infantry unit while at least one enemy vehicle exists on the battlefield. If all vehicles are destroyed, tank destroyers become like any other tank, with no preferred target, and will attack the nearest building or infantry unit.

Tank destroyers are one of the possible crate bonuses in skirmish and multiplayer matches.

In the vanilla Red Alert 2, the tank destroyer shares the voice set with the Grizzly battle tank, like most other Allied vehicles. It was given a unique voice set in Yuri's Revenge. 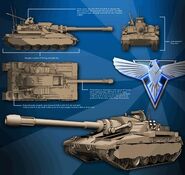 Icon with Chinese text
Add an image to this gallery
Retrieved from "https://cnc.fandom.com/wiki/Tank_destroyer?oldid=230919"
Community content is available under CC-BY-SA unless otherwise noted.