The Tankbuster is the Empire's anti-armor infantry. Unlike the anti-tank infantry of the Allies and the Soviets, they cannot attack aircraft. 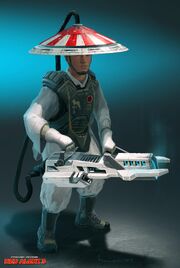 There is but one question on the lips of military strategists worldwide: how could the Empire of the Rising Sun have gathered such an army in secrecy? There is no way the Empire could have access to the same resources in raw materials or warm bodies as the Soviet and Allied nations, now reeling from the Empire's ambitious plot. The answer as yet is unknown. What is painfully obvious, however, is that the Empire commands vast military forces designed to overcompensate for virtually everything the Soviets and Allies have in their modern arsenals. One such example is the Imperial Tankbuster division, the Empire of the Rising Sun's anti-armour foot soldiers. Unorthodox yet undeniably effective, tankbusters represent one of the worst threats the modern main battle tank has ever encountered. Word has it that Imperial tankbusters bear such an important burden within Japanese society that they are never ridiculed to their faces.

Tankbuster divisions seem to be composed of men selected for their stocky stature, strength, bravery, and astute perception. They appear to be trained in the use of a variety of unique, heavy-duty equipment, especially their state-of-the-art MX-19 "Muramasa" personal plasma-cutter cannons—which can melt foot-thick steel in seconds. What's more, these extremely dangerous weapons are only half the package, as tankbusters also are fitted with special protective headgear with a unique purpose: plasma beams from the brim of these wide-brimmed hats may shoot straight down to cut a man-sized hole in any surface, effectively letting tankbusters burrow underground on a whim and with but a twist of their torsos.

This sunburst headgear also serves as sort of a manhole cover until the tankbuster chooses to exit the burrow. The purpose of this burrow became extremely apparent the first time a tankbuster division was caught on surveillance: When one unlucky armour column unexpectedly ran into a tankbuster ambush, the vehicles moved to crush these men in desperation, even as the tankbusters began tearing them apart. But the tankbusters simply sank into the ground before even a single man was overrun. As soon as the armour division had crossed over them, they sprang up again from their spider holes, finishing the job with almost-merciful quickness.

Culturally, tankbusters are poorly understood, even among the mysteries of the Empire of the Rising Sun. There is reason to believe that burrowing into spider holes is seen as a dishonourable and shameful act among Imperial military forces. As well, tankbusters' heavy equipment may be the source of some ridicule among other Imperial forces, if translations of certain intercepted Imperial transmissions are to be taken at face value. However, it seems clear that tankbusters are ultimately well-regarded for their skill and fortitude, and the growing number of sightings of these men in direct combat with armour divisions means that the Empire of the Rising Sun must be training such forces in greater and greater numbers.

While use of spider holes is considered dishonourable, it is likely deemed an acceptable tactic versus the forces of the Soviet and Allied nations, which themselves are likely seen to be dishonourable.

Battlefield reconnaissance has revealed at least these facts about the Tankbuster:

• Enemy of armour -- Plasma-cutter cannons are exceptionally effective against vehicles or anything made of metal, and must have been created solely for that purpose. The weapons are tuned to a special frequency that causes only light burns to unprotected skin, possibly for the tankbusters' own protection.

• Life in a spider-hole -- Being able to drop underground almost instantly is part of what makes tankbusters so dangerous, since a tank cannot so much as crush one of these men in this state. While burrowed, tankbusters are well-protected against most weapons, though they cannot retaliate either.

• A heavy burden -- The bulk of tankbusters' equipment, including those wide-brimmed hats, means their firepower can only be brought to bear directly ahead. This was observed when the same surveillance aircraft that first spotted tankbusters managed to escape intact. Consequently and ironically, standard frontline infantry are proving to be the most capable at neutralising these threats.

• The sleeper ambush -- Somehow and at some point, the Empire of the Rising Sun must have planted tankbuster sleeper cells in militarised zones on Soviet and Allied borders. How else to explain rare cases of tankbuster squads suddenly bursting from the earth to attack without warning...?