Although Allied leaders have repeatedly downplayed the personal contributions of Agent Tanya in the ongoing war against the Soviet Union, this has only fueled speculation that Allied forces likely would have long been defeated if not for her. Speculation has also run rampant about her place of birth, last name, military rank, marital status, weight, height, shoe size, number of confirmed kills, age, natural hair color, and more—all closely-guarded secrets. What is no secret, however, is Tanya's propensity for single-handedly resolving huge military conflicts, typically by somehow neutralizing most every enemy combatant.

As a result, some say Tanya is invincible, though the Soviets have continuously (and as-yet unsuccessfully) sought to disprove this theory. They did learn that their conscripts were no match for her exceptional marksmanship, and even their mightiest battle tanks were vulnerable to her skill with explosive charges. This incredibly talented American operative is often asked to undertake the Allies' most dangerous missions. When she is not in combat, chances are she is gathering critical mission intel by any means necessary.

Known to have somewhat of a fiery disposition, Tanya allegedly has written authority to speak freely at all times, and therefore is never openly accused of what Allied high command must think is an insubordinate attitude. Nevertheless, Tanya's long string of successes in battle perhaps justifiably entitles her to some additional liberties and comforts. Though her exploits are far better-known than her identity, she is widely considered a modern-day heroine to the people of the many nations she has helped to defend.

Though Tanya travels light, she is never without her trusty Time Belt, a unique prototype developed by the sharp minds at FutureTech. This fantastical device somehow whisks Tanya back to her position several seconds ago—letting her correct any instances in which she miscalculates a combat engagement. Soviet ministers have publicly derided the device as "unfair", and although the Allies have rather desperately urged FutureTech to mass-produce it, only Tanya as yet possesses this technology. When asked of her concern for possible side-effects of matter-transporting herself, essentially negating any injuries while retaining the memories of those events, Tanya merely noted, "It's pretty wild." Her willingness to continue to use the device is contributing to research surrounding other, similar technologies.

In the Allied Campaign she was introduced by President Ackerman as a woman who can kill in many different ways, and the Commander is advised not to get on her bad side. She participated in the liberation of Cannes fighting alongside the Allied Commander and fellow American Warren Fuller. In Heidelberg she requested help from Lissette Hanley and the Commander against the core of the Soviet Headquarters. After the Soviet threat had been thwarted, she resumed her duties.

When the ERS declared war on both the Allies and the Soviets, the two mortal enemies formed an alliance to defeat the upstart superpower. She worked with Natasha and hated her from the start, though started taunting her herself when she demonstrated that she can more quickly dispatch enemy fighters (albeit at a closer range). Additionally, she helped four Soviet engineers capture several Imperial Instant Generators during the Allied-Soviet operation The Unfathomable Fortress, in order to disable the guns on the Floating Fortress.

She also joined forces with the Allies to put a stop to Ackerman's madness. Tanya congratulated the Commander for eliminating the US President and thus not compromising freedom convictions. She reported to Field Marshal Bingham that the Imperial Shogunate were meeting together at one place in Tokyo and that they could capture them, forcing the Empire to surrender. She also showed an attraction towards the Commander and scolds Lt. Eva when the intelligence officer flirts with the Commander. Tanya actively fought against the remnants of the Communist leadership at Leningrad.

After the campaign ends she dressed up in a black dress to ask the Commander out, unaware that her rival Eva was also asking the Commander to go out with her for dinner.

In the Empire campaign, she led the Allied forces at Santa Monica in repelling the Imperial offensive, but ultimately failed to stop the Empire from capturing the city and turning its media centers against the Allies. She also fought the Imperial forces during their invasion of Amsterdam by the Imperial Shogun who killed her brutally.

In the Soviet campaign, she appeared in the last mission Blight on the Big Apple defending the Statue of Liberty. Just like her GWIII counterpart, she destroyed the four Soviet Dreadnoughts attacking the capitalist monument. Ultimately, however, she was killed in battle. Commander Moskvin commented on her courage if his forces kill her (or if the commander kill her using a Top Secret Protocol), or expressed his anger that she deserved worse if the Soviet commander kills Tanya before him.

Tanya remained active during The Uprising. When rogue Imperial commander Kenji Tenzai activated a stolen Technology inhibitor and disabled all of the Allied vehicles in the battlefield, she was paradropped in along with a team of Allied infantry reinforcements to apprehend him.

Battlefield reconnaissance has revealed at least these facts about Tanya:

• Deadly dual pistols -- With her custom pistols, Tanya is able to achieve a dizzying firing rate that exceeds that of many modern assault rifles. Combine that with her incredible accuracy and the result is Tanya's unparalleled ability to take on small and big armies of enemy infantry all by herself.

• Plenty of charges -- Tanya always carries a significant supply of explosive charges and is extremely quick in setting them to explode on enemy facilities, vehicles(even Apocalypses), or ships. She is said to use these charges with some zeal, though Allied commanders have repeatedly cautioned against using them on the highly-explosive Soviet super-reactors.

• The mysterious Time Belt -- In the unlikely event that Tanya should be physically threatened in some way, she has a means of instantly escaping from a dangerous situation thanks to the experimental Time Belt, courtesy of the Allies' research partners at FutureTech. The Time Belt ironically requires a short amount of time to recharge and so cannot be used continuously.

• Champion swimmer -- Among Tanya's many impressive athletic talents is her ability to swim tirelessly, to the point where she can fight just as effectively at sea as she can on foot. In effect this means that even the mightiest Soviet warship or naval base is unsafe from her.

Tanya appears only during campaign, and cannot be deployed during skirmishes.

Upon exiting a Boot Camp 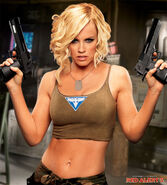 Tanya loads up her M16A2 rifle.

Tanya poses with her Desert Eagle.
Add an image to this gallery 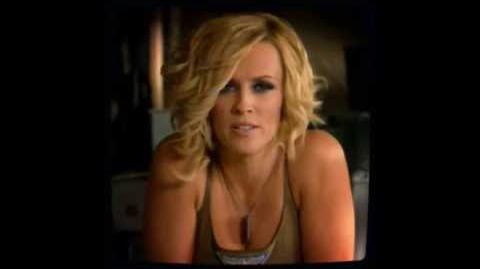