A further development of the Firefly Laser Rifle is the Tarantula laser chaingun.

Powered by a more powerful energy cell and utilizing three rotating barrels it allowed for a sustained rate of fire without overheating the weapon. The miniaturized Obelisk of Light module embedded within transmitted energy converted into light to three focusing crystals housed within the metal cooling apparatus in front of the weapon, which coupled with the rotating of the barrels allowed for precise and deadly fire. Much like the Firefly Laser Rifle a single shot will light the struck area on fire for several seconds due to the extreme amounts of heat each laser bolt generates.

However, the weapon didn't have any sights or aiming equipment at all and were only used to full effectiveness by experienced personnel. As such, it was only issued to Black Hand heavy weapons specialists and Nod officers during the defense of the Cairo Temple of Nod, where the weapon was proven to be an effective anti-personnel/armor weapon.

In multiplayer, this weapon is a good investment all around. Boasting good firepower, range and accuracy, there is no reason why players shouldn't get this. Effective against both infantry and armored targets and only costing 450 credits, it is arguably one of the best weapons available on a bargain.

Despite these advantages, it doesn't compare to the tier 3 firearms when it comes to raw destructve power. 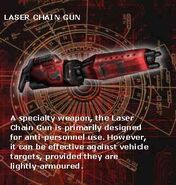 Retrieved from "https://cnc.fandom.com/wiki/Tarantula_laser_chaingun?oldid=150073"
Community content is available under CC-BY-SA unless otherwise noted.