Airports are civilian structures designed for the commercial traffic of passenger aircraft. During wartime, however, these buildings could be captured and the planes commandeered by a military engineer for their use. They are usually used to coordinate a paratrooper assault consisting of the respective faction's main infantry in a theater. The transport plane used to carry paratroopers may be modeled after real life US C-130 transport aircraft.

Once captured, a Tech Airport allowed commanders to call Paratroopers. About 7 or so are dropped from each plane; typically, Soviets will get 9 from each paradrop, whereas Allied and Yuri will get only 6 due to their infantry's higher value. Clever American commanders combined their paradrop ability with this to bring large amounts of GIs in any needed area in minutes.

In the 4th Soviet mission (Romanov on the Run) of Yuri's Revenge, the Soviets made additional use of this structure. During this retrieval and evacuation mission from Libya, the Soviets capture an airport in order to call in an evac helicopter to transport Romanov from the theater.

It looks slightly different in Yuri's Revenge, where its footprint is square shaped rather than being sloped as with the Red Alert 2 variant. 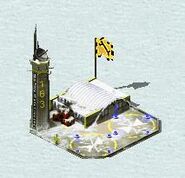 Retrieved from "https://cnc.fandom.com/wiki/Tech_Airport_(Red_Alert_2)?oldid=226811"
Community content is available under CC-BY-SA unless otherwise noted.