To continue the tradition of militias in developing nations, the GLA continue to employ Technicals in their expanded arsenal. Like in the first Generals, it's possible that it will be used for transport and anti-infantry purposes. As seen in the Gamescom 2013 Livestream, the Technical can be upgraded with IEDs which can be placed on the ground.

A suicidal bomber variant, called the Terror Technical, is used by the Demolitions General Nitro.

In the first teaser, one was seen driving away, while another exploded. In the second teaser, three were seen retreating from an EU Valkyrie, and one was taken out and the shout of the technical can be heard carefully, It is unknown if the Technical would again be upgraded with salvaged parts. 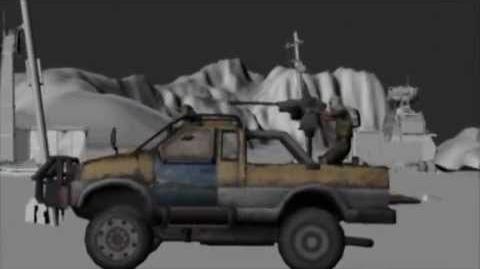 Retrieved from "https://cnc.fandom.com/wiki/Technical_(Generals_2)?oldid=184843"
Community content is available under CC-BY-SA unless otherwise noted.