Although listed as a tech center, the structure has no value when captured. The Allies and the Soviets have their own tech centers to provide advanced support powers and units. In some missions, these structures are used as civilian evacuation points. The structure can also be used as a prison. 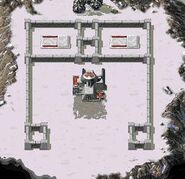 Add an image to this gallery
Retrieved from "https://cnc.fandom.com/wiki/Technology_center_(campaign_building)?oldid=185576"
Community content is available under CC-BY-SA unless otherwise noted.