The Temple of Nod is the heart of the Brotherhood. It acts as their communications hub and command center, housing the computer core. It is also Kane's residence, where he commands the Brotherhood with an iron fist, surrounded by elite zealots and templars devoted to his cause.

During the First Tiberium War, the Temple of Nod was a massive, cathedral-like building, resembling a scorpion. Its architecture was neo-gothic, mixing heavily decorated metal frames with red and black stained glass windows. Several flying buttress extended from it sidewards, resembling scorpion's "legs" and a tail-like protrusion extended from the segment of the temple containing the nuclear missile silo.

The Temple of Nod in Sarajevo was the headquarters for all Nod forces, and was the temple where Kane stayed. It was invaded by GDI forces towards the end of the First Tiberium War. Eventually, a team led by General Solomon battled Kane's elite Black Hand troops for 72 hours before it was decided that the team would pull out and an ion cannon would annihilate the base.

The Sarajevo Temple had an elevator that provided direct access from the underground command center to the main hall. There were such elevators in the Cairo Temple, but these were severely damaged in the ion cannon strike that hit the Temple, thanks to Captain Nick Parker (Havoc).

The Temples in Cairo and Sarajevo were both heavily damaged and much of them destroyed in the First Tiberium War, both by Ion Cannon strikes, the one in Sarajevo according to General Solomon's order and the Cairo site by General Locke, as Captain Nick Parker helped to accurately target the orbital cannon. While the latter survived the blast intact, the former, after being heavily damaged by Global Defence Initiative forces, has mostly crumbled under the blast, burying the underground facilities under tons of rubble.

The Sarajevo site was declared secure territory by GDI and excavation efforts were made. However, they progressed slowly, as in 2030 they were still unearthing the facilities containing the Tacitus. Due to this, Nod forces attacked the GDI base in this region, shutting down the excavation operations and regaining control of Kane's former command center.

The Sarajevo Temple was replaced in 2047 with the new Temple Prime, which was destroyed in the same year, again by an ion cannon strike.

The Temple of Nod is used ingame as a Nuclear Missile Silo, enabling nuclear strikes. They are, basically, a counterpart of the GDI advanced communications center. They consume quite energy consequently. The nuclear weapon can only be used once and once used cannot used again.

Render of the Temple's interior 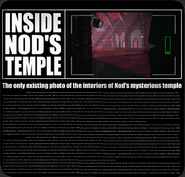 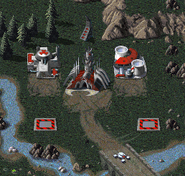 The Temple of Nod in Sarajevo

The Temple of Nod in South Africa 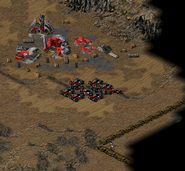 Ruins of the Temple of Nod at Sarajevo in 2030. A GDI base was built to the southeast

Ruins of the Temple of Nod in a snow theater.
Add an image to this gallery 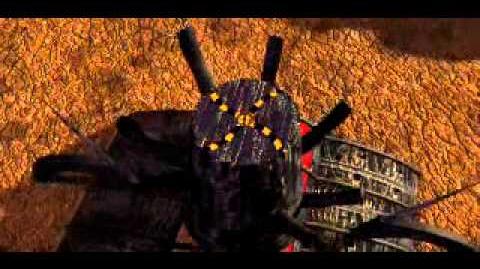 Retrieved from "https://cnc.fandom.com/wiki/Temple_of_Nod_(Tiberian_Dawn)?oldid=229739"
Community content is available under CC-BY-SA unless otherwise noted.