The Temple of Nod is the ultimate defensive structure in Tiberian Twilight for Nod.

The Temple of Nod constructs a missile in three distinct stages. At its base level, the missile does a good amount of damage, but over time Tiberium vapor pods are attached, creating a large, corrosive and damaging cloud at the blast site. If the missile is allowed to charge up to max-level, it gains a Tiberium catalyst, which arcs deadly waves of Tiberium across any units foolish enough not to avoid it.

The "Tiberian Dawn" achievement can be earned for destroying 20 units or structures with a single Temple of Nod missile.

Due to the immense resources required to build the structure and the large power requirements to sustain it, Temples of Nod were built sparingly on the battlefield during the Fourth Tiberium War. Two Temples of Nod were stationed outside the stage where the decoy Kane gave his speech to thousands of Nod followers outside Threshold 19. Nod also deployed a Temple of Nod to launch ballistic missile to dislodge GDI positions at the base of the tower. 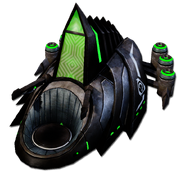 Retrieved from "https://cnc.fandom.com/wiki/Temple_of_Nod_(Tiberian_Twilight)?oldid=237668"
Community content is available under CC-BY-SA unless otherwise noted.