Only one may be built at a time

The Temple of Nod is the Brotherhood of Nod's superweapon structure during the Third Tiberium War.

Prior to the Third Tiberium War, GDI's focus on Tiberium abatement allowed the Brotherhood to secretly stockpile a considerable number of nuclear weapons.[1] Nod consolidated its nuclear arsenal at a nuclear launch facility in Cairo.[2] However, after the destruction of the Cairo facility, Nod once again began employing these structures for the storage and launch of nuclear missiles.[3]

In addition to the nuclear launch facilities, these temples also possess advanced supercomputers, powerful backup generators and control systems, designed to quickly restore power to a Nod base in the event of an EMP attack.[1]

The Temple of Nod in Tiberium Wars still serves as a nuclear missile silo with a cooldown time of 7 minutes between each successful launch. In case of EMP attacks, the Temple can bring backup systems to keep a Nod base online after a strike using the Master Computer Countermeasures ability. The structure is heavily armored and can survive a superweapon attack, albeit being severely damaged, allowing airstrikes or sneak attacks to destroy it before it can be repaired.

The Black Hand can also deploy a decoy Temple of Nod, tricking the enemy into believing they have access to nuclear arsenal early, or fool them regarding its location.

The Brotherhood of Nod constructed or brought online the Temple in two missions of the GDI campaign. Its first use was in GDI's final siege on Temple Prime, where Kane was about to launch the last of Nod's nuclear missiles. Nod also constructed a Temple of Nod in the middle of Ground Zero as an attempt to delay GDI's destruction of the Scrin's relay node. In the Nod campaign, a Temple of Nod was already constructed in Sydney, which Nod used on GDI to terminate their alliance against the Scrin invaders. The Nod commander had either captured or destroyed Killian's Temple of Nod in his mission to capture her. The Temple of Nod was available to the commander from that point onwards. 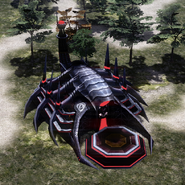 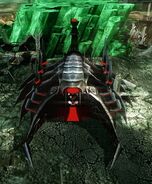 Retrieved from "https://cnc.fandom.com/wiki/Temple_of_Nod_(Tiberium_Wars)?oldid=237667"
Community content is available under CC-BY-SA unless otherwise noted.