Tera Gallagher is an infantrywoman serving with the GDI 22nd Infantry Division, who appears in the Tiberium Wars novel and was slated to appear in Tiberium.

She didn't get along with newly-recruited soldier Ricardo Vega, believing his meteoric rise through the ranks was due to his father, the famous General Javier Vega. However, they eventually became friends over the course of the Third Tiberium War.

She was alive after the Third Tiberium War, stationed at the Mobius Research Station where she served as a Commando who worked under Michael McNeil. At the time, the last of the Scrin's Threshold Towers was active which prompted an investigation of the alien structure. To that end, Ricardo Vega was dispatched to the research station where he was briefed by Tera Gallagher who he was surprised to see. She informed him that they had a Brotherhood of Nod operative known as Maja working for them though she did not trust the Priestess.

When Vega gave the Brotherhoods traditional greeting, she was disgusted and told Vega not to let Command see him doing that as he looked like "one of them". When he was briefed on his mission, he took a Pitbull and troopers to investigate the tower but before departing, Gallagher told Vega to take care of himself. 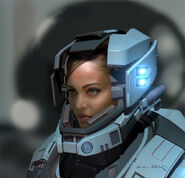 Retrieved from "https://cnc.fandom.com/wiki/Tera_Gallagher?oldid=229936"
Community content is available under CC-BY-SA unless otherwise noted.