Terror drones were small robotic units, about half the height of a normal Soviet conscript, used as a terror weapon by the Soviet Union during the first and second iterations of the Third World War.

Designed to be small, fast, and above all, cheap, the terror drone was made to seek out and destroy enemy vehicles and destroy them before they entered combat. For their time, terror drones were the cutting edge of the world's robotic technology, being even more advanced than the Allied robot tank, due to their individual, self-sufficient AI systems.

In terms of design, terror drones were a large sphere with cutting and ripping tools attached to four legs, capable of latching onto, and eventually destroying, land vehicles. As they were lightly armoured, they were very quick, easily able to outrun almost any vehicle at full speed. Once a drone latched onto a vehicle, it burrowed inside and slowly tore it apart from the inside, eventually destroying it unless the drone was somehow neutralized. They were also highly lethal against infantry, which they sew apart in one hit.

Terror Drones in Red Alert 3 were changed to disable enemy vehicles and swim replacing the giant squid in terrorizing the seas.

Terror drones are very cheap, costing only $500 per unit or, if an Industrial Plant is built, a mere $375. They can be used to attack ore miners, the only downside being that they would exit a chrono miner when the latter chronoshifted back to the ore refinery.

Due to the terror drone's extremely fast speed, it is very difficult to catch them before they reach their targets, but their lack of armour makes them easy to destroy. Small-arms fire, Tesla bolts, prism beams and Mirage tank guns are sufficiently accurate to quickly destroy terror drones; tank shells and missiles are somewhat less so. Air units are ideal for scouting the map for terror drones and destroying them, since they are immune to their attacks.

The only way to safely remove a drone from an infected vehicle is for the unit to be repaired at a service depot or a tech outpost. An Infantry Fighting Vehicle with an engineer inside it was also fit for the task. The drone will also be destroyed if the vehicle it infects is destroyed by an outside attack, so in desperate situations, deliberately destroying one's own infected vehicles by force-firing on them will prevent other units from being attacked. Also, applying the Iron Curtain on an infected vehicle will make the terror drone completely disappear.

On rare occasions, if a drone happens to leap on an enemy infantry unit that is adjacent to a body of water, the drone will disappear. This leaves the possibility that the drone tackled the infantry into the water; killing them both simultaneously. 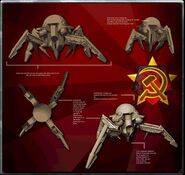 Late beta icon
Add an image to this gallery
Retrieved from "https://cnc.fandom.com/wiki/Terror_drone_(Red_Alert_2)?oldid=236872"
Community content is available under CC-BY-SA unless otherwise noted.