Terror drones were small, amphibious robots capable of dismantling vehicles from the inside, first seen during the Third World War.

The aptly named terror drone inspires great fear in Allied soldiers, especially vehicle crews. Originally designed as a remote control scout unit (a role at which it still excels), but Soviet commanders soon realized its potential as a weapon platform.

After several attempts to arm it with ranged weapons failed due to limited room for ammunition and recoil issues, it was equipped with iridium-alloy claws capable of slicing through several inches of reinforced steel. These "Dismantler Claws" can be used to burrow into vehicles and destroy it from within, and are even more effective against infantry. In addition, the terror drone was also armed with a Zmeika Electro-Stasis ray, a variable-frequency electro-magnetic beam capable of immobilizing enemy vehicles, preventing them from escaping.

In order to program the vast neural networks needed to locate weak points in enemy armor within seconds, a brilliant young member of the design team, Konstantin Belousov volunteered to program the network by interfacing his own brain with it directly. The experiment was a success, and the newly-programmed terror drone destroyed vehicles 94% faster than its predecessors. However, Belousov quickly fell into dementia after the experiment and was finally arrested in a subway after attacking passers-by with a cattle prod. His condition was officially attributed to stress, and the Bureau of Robotics has refused to comment on whether later versions of the Terror Drone are still controlled via human interface.

Due to their small size, terror drones are extremely nimble, capable of outrunning most vehicles and infantry. In addition to making it easier to dive into enemy vehicles, this also makes them good scouts. However, this also means that they are very fragile, and can be easily destroyed by anti-infantry fire if they fail to close the distance or escape in time. Their small size allows five of them to fit in a Twinblade or a Bullfrog.

Terror drones are waterproof, so they can attack ships and amphibious vehicles in addition to ground vehicles. They can also instantly kill enemy infantry using their Dismantler Claws, similar to War Bears. The only enemies they are completely helpless against are aircraft, so care should be taken to avoid them.

Since terror drones can be removed by repair drones, one strategy to prevent this is to have one drone paralyze an enemy vehicle using its Stasis Ray, and then have another dive into the vehicle. Terror drones are effective at harassing enemy collectors, though they can be stopped by walls. The Terror Drone Surprise Protocol may cause terror drones to emerge out of destroyed Soviet vehicles.

Despite being built by the war factory, Terror Drones have more in common with infantry, being able to be carried by troop transports, healed like infantry, swim and taken out by a single bullet from specialized anti-infantry units such as Natasha Volkova and Shinobis. Its role is somewhat in a par with Spy and Shinobi, as all of them are saboteurs. Whereas Spies and Shinobis wreck havoc in the infrastructure, the Terror Drone sows doom to units.

Although being said to be effective against ground units, it is no exclusion that Terror Drones can easily infest aerial units that are on the ground. This is most useful against Soviet army, with only having repair drones at the Crusher Crane.  For example, Twinblade using the drop ability or the MiG Fighter that's reloading. If the aircraft is destroyed, the drone will safely eject with a parachute on, not taking any damage.

Terror Drone destroying the MiG and folding out the parachute.
Add an image to this gallery 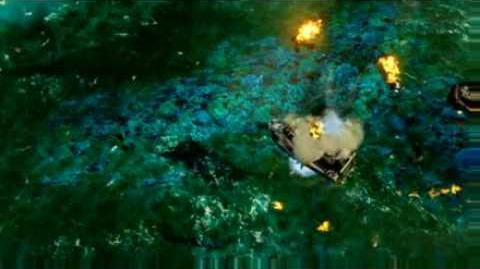 Retrieved from "https://cnc.fandom.com/wiki/Terror_drone_(Red_Alert_3)?oldid=237686"
Community content is available under CC-BY-SA unless otherwise noted.