The Tesla tank was an experimental Soviet tank that saw limited deployment during the Third World War.

The chassis was fully tracked and two small yet advanced Tesla coils were mounted in a turret.

It was also equipped with the same electromagnetic disruptor device fielded by Tesla Troopers, which disable enemy vehicles. Compared to the Tesla-armed Stingray amphibious strike craft, the Tesla Tank saw much more restricted deployment. It was notably stronger compared to older versions of the Tesla tank.

Tesla Tanks saw limited deployment and were only used for specific occasions. Premier Anatoly Cherdenko set the Tesla tanks against the Allied forces in Leningrad at the end of the Third World War.

In the Soviet campaign, Premier Anatoly Cherdenko's forces made heavy use of these Tesla tanks on Easter Island in an unsuccessful attempt to purge internal threats to his power. The Soviet Commander who defeated Cherdenko acquired from him a number of Tesla tanks which were then used to attack Fort Bradley in New York and then to eliminate the last Allied forces at the Liberty Island.

The Tesla tank is a special unit which may not be produced either in campaign or multiplayer mode. The exception is in the Soviet mission- The Stone-Faced Witnesses. The Cherdenko loyalist Soviet war factories produce these Tesla tanks and if captured, the player may as well. The player also starts off with some Tesla tanks in Blight on the Big Apple, but still can't build any. 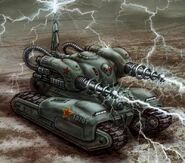 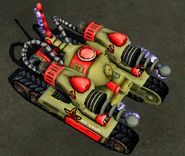 Render
Add an image to this gallery
Retrieved from "https://cnc.fandom.com/wiki/Tesla_tank_(Red_Alert_3)?oldid=237631"
Community content is available under CC-BY-SA unless otherwise noted.