Tesla troopers were Soviet heavy soldiers used primarily as anti-armour and anti-infantry shock troopers during the first and second iterations of the Third World War.

Advancements in technology made by the Soviet Union as part of their covert rebuilding program allowed the Tesla coil to be miniaturized into a perfect man-portable form. While early attempts at such a weapon were made and fielded by the Union before, it was not until the invention of a Tesla-powered battle suit that its full potential could be reached. The end result is a sealed, insulated combat uniform with a Tesla coil gauntlet, powered by a miniature back-mounted Tesla generator. Typically worn with an insulated jumpsuit underneath and red overalls on top, it is used by specialists in tank warfare, owing to it being uncrushable by tanks. In a pinch, they can also power up Tesla coils.

Lt. Eva Lee briefed the Allied commander about Tesla troopers during Operation: Hail to the Chief, describing their power against tanks and their ability to power up Tesla coils with their extra energy. This ability was later seen during the liberation of the city.

The Tesla trooper was first made available during the Soviets' invasion in New York and played a significant role in Paris, turning the Eiffel Tower into a gigantic Tesla coil.

Tesla troopers are best used as static defenses or escort for an armour column, as they are effective against infantry, yet particularly devastating to enemy tanks (which cannot crush them). Tesla troopers can charge up a Tesla coil for a slow-recharging, but devastating bolt of increased range and power. Two troopers have the juice to boot up a tesla coil online when a base runs short on power while three or more will grant the same Tesla coil the range and firepower bonus. It is best to wait until a cloning Vat can be built because it will produce two Tesla troopers for the price of one and the cost of training one is a bit expensive. They can be overwhelmed by GIs, though, so they are best to be escorted by conscripts or flak troopers. Since the range of their Tesla weaponry is barely beyond that of an attack dog, and their movement speed one of the slower amongst infantry, long ranged anti-personnel units pose a particular threat to them.

When they reach the elite rank, their Tesla bolts can bounce to two other targets, so an elite Tesla trooper has a chance to damage up to three enemy units with one bolt, which is devastating against groups of enemy ground units especially infantry.

After the Psychic Dominator Disaster, the Soviets introduced a new design of their Tesla trooper. It was more powerful and cheaper than the old version, but more vulnerable to tanks as it could be crushed by them. They can also no longer charge Tesla coils. After Anatoly Cherdenko's trip to 1927, the Tesla troopers were modified and were able to charge Tesla coils and were uncrushable again. 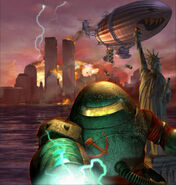 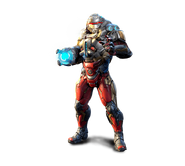 Retrieved from "https://cnc.fandom.com/wiki/Tesla_trooper_(Red_Alert_2)?oldid=245560"
Community content is available under CC-BY-SA unless otherwise noted.