End of GLA War in Europe

The Dragon's Destiny is the final mission in the Chinese campaign of Command & Conquer: Generals Zero Hour. The decisive Chinese victory spelt the end of the Global Liberation Army still holding out in Hamburg, China's rise to leading superpower and the USA retreating into political isolation.

With world opinion turning favourably towards China, the Chinese military soon destroyed all GLA forces that were retreating from Europe. Soon, only one last major GLA stronghold was still standing against the Chinese offensive near Hamburg in Germany. The Americans attempted to defeat the last terrorist base and had already established a fully sizable base of operations.

However it seemed the Americans underestimated the strength of the GLA as intelligence spotted a large GLA force bearing down on the base. The US Army hastily issued the order to evacuate and abandoned their vehicles and tanks to get away. Most of the forces and personnel were evacuated by Chinook but as the GLA entered the base's perimeter, a RPG Trooper shot down one of the last Chinooks. The US base was captured completely intact, and the few remaining American pilots left on the base became POWs.

﻿The Chinese arrived with a large force and had already established a sizable base of operations and resources for the Chinese commander to use. Now having access to the full military arsenal, the commander immediately prepared his defenses for the anticipated GLA attack. With many abandoned US vehicles littered around the area, these vehicles were soon captured by the Chinese forces to bolster their own strength.

The GLA did come in waves, bringing both the full might of the GLA and American arsenals against the Chinese. Both sides became engaged in a war of attrition as GLA-commandeered aircraft made systematic surgical strikes against the Chinese base. The Chinese commander knew that China's arsenal alone could not match both the GLA and the US arsenals, so he sought to level the playing field by capturing its' enemies weaponry.

By the time the Chinese commander made this decision, Chinese intelligence detected countdowns from the GLA Scud Storm and later the Particle Cannon. They also located a smaller GLA base some way south of the Chinese base. The Chinese constructed their Nuclear Missile Silo, which would not be enough to eliminate two superweapons at the same time, and sent Black Lotus to capture the smaller GLA base. It turned out that the smaller base was to act as a decoy and were booby-trapped. Black Lotus however captured the base, and the two artillery platforms defending it. While the Chinese used captured GLA weaponry to defend the base, Black Lotus stealthily made her way to the US base while the Chinese Commander built up an assault force.

The Chinese base was already struck by the Particle Cannon by the time the small GLA base was captured. Previous carpet-bombing efforts to delay the strike proved ineffective as the GLA kept rebuilding the Cold fusion reactors. So the Commander decided to blast their way through the American base before dealing with the GLA stronghold. With Black Lotus leading the way, the assault force blasted their way through the GLA-captured defenders, finding the Particle Cannon sitting in front of a POW camp. Rather than destroying the superweapon, the Chinese captured the superweapon, along with the large majority of the base, and soon forced the GLA masters out of the stronghold. The liberated pilots were thankful to their Chinese rescuers that they were allowed to commandeer Chinese vehicles.

With American technology recaptured, the tables turned against the GLA. They were also given a taste of their own medicine, as the Chinese constructed their own Scud Storm and launched the missiles against the GLA stronghold. The Chinese also made hit-and-run raids using a combination of GLA vehicles and the American airforce so the GLA were soon confined to their last stronghold in the mountains across the Rhine river.

The base was assessed by three bridges, all heavily defended on the mountain side of the river. The Chinese soon built a separate army at each bridge - the bridge giving direct access to the US base would be crossed by American tanks, the bridge to the valley to be crossed by the Chinese tanks, and the bridge leading to the plateau where the small GLA base was located would be assaulted by Chinese-commandeered GLA vehicles. All three bridges was soon struck at the mountain side by one superweapon each, and the Sino-American army immediately capitalised on the attack while the main Chinese force and Chinese-captured GLA army were delayed by the radiation of the nuclear waste and toxin spill. The GLA stronghold met the Sino-US forces and tried to repel them with everything they had, while the other two Chinese armies (after the radiation and toxin spills were cleared) used the diversion and invaded the base perimeter relatively unharmed under good air cover.

The Sino-American army proved to be too strong for the GLA defenders, and all three armies would later converge on the last major GLA command center in Europe. The Chinese-GLA army took out the Scud Storm, which was about to fire its last missiles against the Chinese bases, while the US and Chinese forces destroyed the command center and mopped out the last GLA defenders.

The destruction of the last GLA stronghold broke the rest of the GLA into fragmented pockets of resistance. The US became a reclusive military force even as they stood up for homeland defenses and its security, while China became the world's leading superpower. GLA war criminals were put on trial and the Eurasian Unity League signaled the Chinese dominance of both Europe and Asia.

Initially, build a force that can hold out attacks from US and GLA forces. US forces are the most common attackers by their airstrikes and ground attacks. While at it, build a force to capture the fake GLA base and also the 2 abandoned US Construction Dozers are near your base. Capture the fake base and upgrade it to real ones and build US base in that same area. The GLA will also use their Particle cannon and SCUD storm superweapons against you.

Build a force consisting of Overlords, Quad Cannons and Crusaders and firstly push the enemies' US base. Optionally, capture the abandoned US vehicles, especially Paladins and Avengers.

Either capture then sell or destroy the US base and rescue the Pilots. Put the pilots in your Overlord tanks and then push GLA forces out in 2 fronts: from the back, and a frontal attack with air support from US. Then crush all of GLA in the area.

NOTE: Refrain from building nuclear silos to counter enemy's superweapons, as building one would trigger a Sneak Attack of veteran GLA vehicles against your superweapons. Focus on your Particle cannons instead. 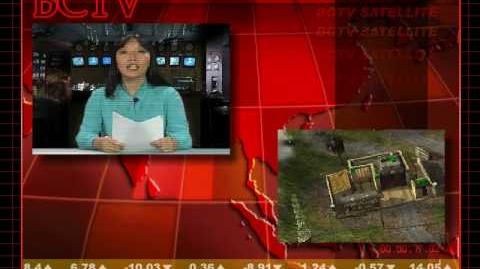