The Dragon Unleashed is the first mission in the Chinese campaign of Command & Conquer: Generals Zero Hour. The operation marked the beginning of the Chinese liberation of Europe.

Prior to the mission the GLA made a daring attack on the USA's European Central Command in Stuttgart. The assault was successful because the GLA used captured Chinese weaponry that gave the terrorists the much needed firepower to overrun the American defenses and capture the US base. In order to quickly repel the GLA, Chinese command ordered a nuclear strike on the GLA-captured stronghold. The GLA's celebrations were cut short when a nuclear missile decimated the occupants and a large portion of the American base. There were a few survivors who escaped the blast, necessitating a ground assault on the GLA remnants.

﻿The Chinese forces arrived south of Stuttgart's main city. Establishing a base of operations the Chinese General was given access to many Chinese technologies including Inferno Cannons, Speaker Towers, and even a single but powerful Overlord.

Stuttgart itself was booby-trapped with cloaked demo-traps and GLA units hiding to ambush the Chinese. However they were all snuffed out by the newest addition to the Chinese arsenal: the Listening Outpost. Several times the joint Sino-American force was attacked by GLA Rocket Buggies and Scorpions in the city and on open countryside but all attacks were quickly repelled.

Wiping out the GLA

﻿With the city and surrounding areas cleansed of the GLA forces, the Chinese forces cornered the survivors at their last base at the former US Central Command. After rendering the few access routes cleared of booby-traps, the Chinese strike force moved in. Despite a gallant but futile defense by the GLA, the Chinese forces pressed forward and soon decimated the last of the GLA in Stuttgart.

The Chinese forced the GLA out and reinstated Chinese control of the area. China reportedly regretted launching a nuclear strike on Europe to clear out the GLA in retaliation and vowed that it will restrain its usage of tactical nukes. However the Chinese news reports also stated that the GLA had infiltrated Chinese borders once more and prepared to attack a major nuclear power station in retaliation for the Chinese victory in Stuttgart.

Initially,build a base and use your initial forces to capture the US War Factory,Barracks and Cold Fusion Reactor in the side,guarded by GLA forces. Then build as many as you can with a mix of US and Chinese forces. The city is crawling with GLA traps and forces, use Inferno Cannons and Listening Outposts to sniff out the threat. Capture the Oil Derricks,Artillery Platforms and Repair Bay to support the attack.

The GLA base is on the other side,with Demo Traps laid on the access areas and strong defenses are in place. Force an attack on them and eliminate the defenders and capture GLA base as a retalitation of what they have done. 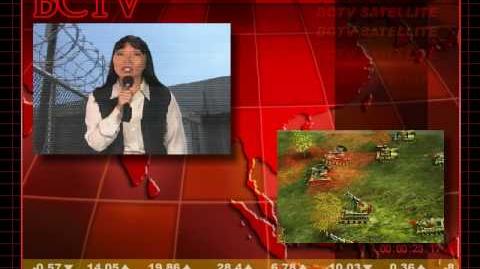