March of the Red Army

The Science of War is the fifth mission of the Soviet campaign during the Soviet perspective of the War of the Three Powers. In this mission, the Soviet Commander is ordered to capture the research data of an Allied superweapon.

Premier Cherdenko praises the Soviet Commander for his efforts in Geneva (much to the displeasure of General Krukov), but informs him that according to Soviet intelligence, American scientists are very close to creating a new kind of superweapon at an Allied research facility, located at Mykonos in Greece.The Commander and Zhana were sent to capture the research data on the weapon, to be studied by the Union's own scientists.

Initially, the Soviet forces were hampered by an Allied Tech Inhibitor, which blocked access to some of their weapons blueprints. However, the Soviet Commander destroyed it with his Twinblade gunships, allowing the Soviets full access to their arsenal, including Dreadnoughts and MiG fighters.

The Allies had a large force in the area. Many outposts were located on small islands, along with a major naval base. Under Fuller, the allies focused on naval power, using numerous dolphins, Hydrofoils, and Assault destroyers. When Giles Price counterattacked, he used a large force of infantry and armor, along with his signature Vindicators.

In the early phase of the battle, the Soviets were hampered by their lack of resources and fought to take over some ore mines on nearby islands. Also, they needed to destroy a Tech Inhibitor and many enemy bases.

Twinblades were deployed to destroy most of the bases. After destroying the Tech Inhibitor that prevented their access to research a few technologies, Dreadnoughts and Akula submarines fired on the Allied fleet. The Allied Mediterranean fleet competed in numerous smaller battles with the Soviet forces, and were holding them off. Despite this, the Soviet Air Force was able to avoid the fleets and took out three Allied outposts. While the Allies were regrouping, Soviet Sputniks set up shop on the islands.

This was not the end of the battle, however, as the Allies used a large naval base to stage a counterattack. Fuller's navy attempted to stop the Soviet advance, and using aircraft carriers, they almost did. Soviet Twinblades were able to avoid most of the Allies' anti-air defenses, and destroyed the naval yards. Under a heavy air and sea attack, the Allied base was destroyed. It was possible that Commander Fuller was killed.

With the Allies out of the way, a Soviet engineer captured the Allies' science facility.

The Allies won't give up their prized labs without a fight, however. It was a race against time to retake or destroy the facility before the Soviets could download the necessary information. The Allies, employing Vindicator bombers, Guardian tanks and IFVs were unable to break through the Soviet defenses and the Red Army got what it wanted at Mykonos. Having lost much, Giles retreated and shouted that the Communists couldn't exploit anything from their mad stunt.

﻿The research data from the Allied facility proved invaluable for the Soviet weapons development program, and would eventually result in the creation of the Vacuum Imploder. Meanwhile, Cherdenko was revealed to have survived the assassination attempt, only suffering a minor head wound. After receiving news from Dasha that the Allies were now holding out in Iceland, Cherdenko sent the Commander to Iceland to rid the Allies from Europe altogether, with Krukov's supervision, while Cherdenko started to root out the mastermind behind the attempt on his life.

The first part of the mission is using the new Twinblade units to destroy the Tech inhibitor and the allied bases in the area. Use Dreadnoughts, Akulas, bullfrogs and twinblades to conquer the skies, the seas and the land. Once you made landfall build a large soviet base near the captured lab. Get hammer tanks, tesla coils and flak cannons to defend the lab because the Allies will use their air power which cause the player to gain access to MiG fighters.

It is possible to win the mission in advance by destroying the final Allied base. When the last Allied building is done for, the countdown timer will be canceled for an immediate victory for the Soviets. 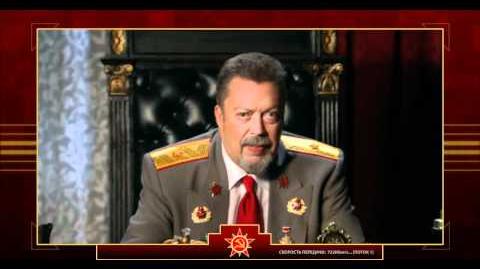 Retrieved from "https://cnc.fandom.com/wiki/The_Science_of_War?oldid=231293"
Community content is available under CC-BY-SA unless otherwise noted.