The Traceless Massacre is the second mission in Yuriko's campaign in Red Alert 3: Uprising. It details Yuriko's escape from Detention Camp Dakota.

The Imperial Shogunate is impressed with the destructiveness Yuriko exhibited during her failed escape attempt, and considered the Omega Program a success. She was given a new surname, "Omega", and was equipped with a psychic dampener that controlled her temper. Her psionic powers made her one of the most dangerous weapons in the Empire's arsenal.

During the Allied assault on Tokyo, Yuriko was found unconscious underneath the ruins of the Imperial Palace. She was taken into custody and transferred to a top-security Allied detention facility on Guam Island, she was cryogenically frozen, waiting to be studied by Allied scientists.

After months of imprisonment, Yuriko was telepathically awoken by Izumi, who told her that Shimada was responsible for all her sufferings, and that because of him, she will always be hunted.

Using her restored psionic powers, Yuriko broke free from cryo-containement, and began wreaking havoc in the detention camp. She broke into other containment cells, freeing the Soviet and Imperial POWs inside. They soon joined the battle against the Allied security personnel there. Angered by her imprisonment, Yuriko decided that Shimada can wait, and vowed to tear the entire detention camp apart.

Yuriko accessed the various data terminals inside the camp in an attempt to locate the base's weakness, and found out that the Allies have been spreading propaganda, demonizing Tatsu and praising the Allied commanders responsible for the invasion of Tokyo Harbor as heroes. She also discovers that most of the base's security personnel are not Allied soldiers, but hired guns from FutureTech, and that the Allies simply bought their services.

Camp Dakota proves to be heavily fortified, with armed guards, base defenses, and disguised Mirage tanks lurking around every corner. It is even equipped with prototype FutureTech weapons, such as the Harbinger gunship and Pacifier FAVs. However, Yuriko still managed to destroy everything of value in the facility, and planned to escape back to the Empire to deal with Shimada.

The Allies learned about Yuriko's escape, and sent two carrier strike groups to intercept her, however, she managed to sink them to the bottom of the ocean, and successfully escaped from the Detention Camp.

The Allies refused to comment on this massacre, and Yuriko was nowhere to be found, vanishing from the public eye. However, one thing is for certain. She will not rest until she has her revenge... 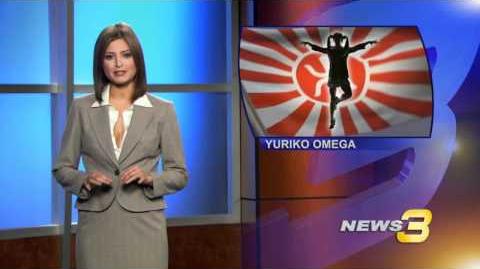