The second-generation Tiberium silo is a storage structure meant to hold Tiberium, and was used by GDI and Nod during the Second Tiberium War and the Firestorm Crisis.

In the Second Tiberium War, the silos grew a bit larger, and hold a bit more Tiberium than before. However, as a consequence, the silos are also easier to destroy. Destruction of a full Silo scatters its contents in the immediate area, which can be devastating if the silo is full of Tiberium Vinifera due to its explosive qualities. Unlike all other versions of both the Tiberium silo and the Ore Silo, rather than storage being spread evenly across all storage buildings, one silo is filled entirely before the next one was filled.

Modified silos continued to be fielded by both armies following the Firestorm Crisis, and some were even seen in civilian use. 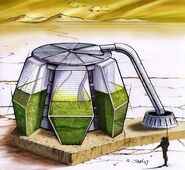 Nod Tiberium silo in Snow Theater
Add an image to this gallery
Retrieved from "https://cnc.fandom.com/wiki/Tiberium_silo_(Tiberian_Sun)?oldid=226907"
Community content is available under CC-BY-SA unless otherwise noted.