Tiberium silos are prefabricated structures used by GDI and Nod in Tiberium Wars, used to store excess Tiberium that Tiberium Refineries did not have room for. The Scrin did not require such a building.

In certain locales, civilian Tiberium silos were observed, and acted as tech structures which granted both a one-time cash bonus and its storage capacity to the faction that captures it.

Created out of special materials that allow extended storage of processed Tiberium, the third generation silos possess cooling/venting towers and are widely used by all human organizations, both military and civilian.

Compared to the universal Tiberium silo type previously used in the Second Tiberium War, the designs differ - GDI (whose design was fathered by Otani-Lincoln Laboratories) and Nod opt for an armoured version, more useful for the modern battlefield while civilian silos usually employ geodesic domes with radiation shielding glass. GDI, with its effort to reduce Tiberium contamination, equipped its silos with advanced ventilation equipment which negated the creation of Tiberium fumes and gases, while Nod's silos were more rudimentary and generated polluting Tiberium gas from its chimneys, supporting Kane's Tiberium proliferation policy.

While GDI commanders who requisition civilian installations are encouraged to reimburse owners of these silos with GDI vouchers exchangeable for credits, Nod commanders and Scrin foremen follow a simpler policy of "might makes right".

The Scrin have no need for Tiberium silos because they had methods to store an infinite amount of Tiberium.

An excess of Tiberium simply meant that the player was not spending enough. Instead of wasting time and money on construction of Tiberium silos, a better alternative was to simply spend the excess on more useful units and structures. Though lightly armored, Tiberium Silos can be used to block line-of-sight of enemy forces, forcing them to destroy it or go around to fire.

Civilian silos can be captured for a one-off payment of 500 credits and then can be used as functional silos for military operations. Also, unlike their military counterparts, the silos provide a radius of ground control, making them viable means of base expansion.

If a silo is destroyed, green Tiberium crystals are released around the silo's ruins.

Unlike their equivalents in previous wars, these silos don't show remaining capacity bars when selected, instead their in-game models come with a vertical bar on the hull that indicates how much Tiberium is stored. 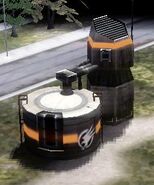 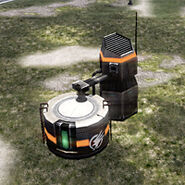 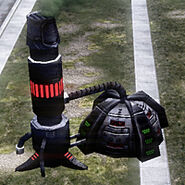 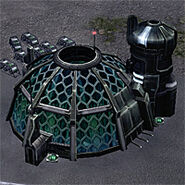 Concept art for the civilian version 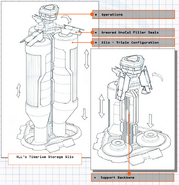 Concept art for an underground Tiberium storage silo
Add an image to this gallery
Retrieved from "https://cnc.fandom.com/wiki/Tiberium_silo_(Tiberium_Wars)?oldid=216929"
Community content is available under CC-BY-SA unless otherwise noted.